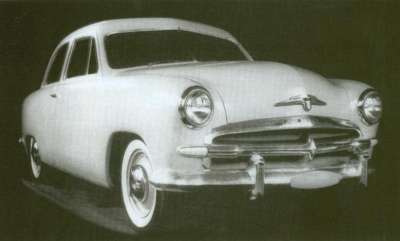 This full-scale clay model of Dick Caleal's cast was built in 1946.

Prospective Ford designer Dick Caleal's mold for the 1949 Ford consisted of five parts: front end, rear end, left side, right side, and a cap piece that included the hood, windshield, roof, backlight, and decklid. The cap also came down around the other four pieces and held them in their correct relative positions. Details, including the bumpers, grille, grille frame, wheel covers, and taillights, were removed before the mold was constructed and reinstalled after the cast of the model was painted. His mold would be turned into a full-size model for the 1949 Ford, but it wouldn't be the only one.

After the plaster model was completed, Caleal said he had it painted Capri Blue at a local body and paint shop, placed it on a velvet-covered piece of Masonite, and drove it to the Detroit office of George Walker, who had conscripted Caleal to build a model as part of an in-house design competition. In early August, to Caleal's surprise, his model was picked over entries by Joe Oros/Elwood Engel and Bob Gregorie.

To be fair to Gregorie, a second contest was initiated and Walker and Gregorie were each authorized to build full-size clay models of their proposals. It was decided that the two models for the second part of the competition would be built in separate, guarded areas at the Ford Design Department.

Walker's full-size model of the Caleal-supplied design was built under the supervision of Oros and Engel, who actually moved into a separate area of Ford's engineering laboratory. They were assigned several Ford clay modelers, including Clyde Trombley, Al Kellum, Caesar Tuskagusa, and Al Sartor.

It took about three months to complete the full-size clays. Oros said he made several changes when translating Caleal's 1/4-scale model into the full-sized proposal, including raising the roofline, increasing the glass area, and redoing the trunk area to meet Henry Ford's requirement that the trunk hold a standing milk can. When both models were finished, Ford's Executive Committee chose the body from Walker's proposal for the 1949 Ford, but stipulated that something be done to the front and rear of the car to give it more distinctive looks.

If the corporate chieftains wanted a new look for the front of the 1949 car and the eventual production grille that emerged featured a prominent central spinner, then what's to be made of Bob Bourke's published claim that he drew up such a feature for Caleal's home-built theme model? In his recollections, the ultimate production version was identical to his design, except for horizontal grille bars that extended beyond the grille cavity (Bourke's concept kept the bars contained within the grille opening) and individual "FORD" lettering on the hood (Bourke envisioned the letters stamped on the arch of the chrome grille frame above the spinner).