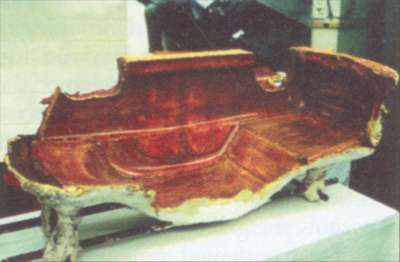 Part of the mold used to make a new cast of Dick Caleal's quarter-size model.

According to Dick Caleal, after he returned home to South Bend work on his clay model in the 1949 Ford design competition, he asked his friends at Studebaker if he could borrow a wood buck and about 85 pounds of modeling clay. He also said that he got permission from studio head Bob Bourke to hire Studebaker clay modelers John Lutz, Jr. and Joe Thompson, who agreed to help him build his clay model in the evenings at his home.

Caleal claimed he designed the car himself, heated the clay to model it in his wife's oven, and that it was made on his kitchen table. He acknowledged that after the clay model was finished, and because time was short, Studebaker designer Bob Koto helped him turn the clay model into a finished quarter-sized plaster model.

Bourke was Raymond Loewy's head designer at Studebaker. He felt bad about having to let Caleal go and, when he found out that Caleal had a chance for another job, he offered to help him in any way he could. Bourke thought that Caleal's proposed job at Ford with George Walker depended on what he produced, so he loaned him a 1/4-scale wooden armature and enough clay to build a model. Bourke also says he told Caleal to call him when the model was roughed out and he'd come over in the evenings to help out. In the meantime, Bourke says he made rough sketches of a proposed car, which he reviewed with Caleal, and that the 1949 Ford concept Caleal took to Walker was 99 percent the car he designed.

Bourke said that by the time he got over to Caleal's house, it was obvious to him that for Caleal to make his deadline, he needed more help, so he asked Studebaker clay modelers John Bird, Jr. and Lutz and designer/modeler Koto if they would also help Caleal. According to Bourke, Koto designed the clean body sides, window cutouts, roof, and part of the back end of Caleal's model. Bourke claimed he designed the front end -- including a spinner grille -- the taillights, the back-end fender detail, and the rear part of the deck on the model.

Koto recalled things differently. He claimed that he agreed to help Caleal, whom he thought didn't know that much about making models. Koto liked Caleal and knew he was building the model for Walker on the promise of a job. Koto said he followed the package measurements given him by Caleal and designed most of the car over a period of about two weeks on Caleal's kitchen table. Koto didn't think the car was one of his best designs and considered it too bulky, full, and fat. According to his recollection, Bourke designed the spinner grille.

Bird's account is fairly close to that of Koto and Bourke: He, Joe Thompson, Koto, and Lutz made a clay model of a 1949 Ford proposal on Caleal's kitchen table to help their friend get a job with the Walker firm. Thompson was in the process of moving to the West Coast, so Bird was asked to take his place. It was his opinion that Koto was responsible for the body design, but Bourke did the front, including the spinner and the detailing. According to Bird, no one got paid for helping Caleal, and everyone thought the model was being built for Nash, which had used Walker as a design consultant.

Koto did the final cleanup of the clay model and prepared it for casting. He was given credit for making the negative plaster mold and the positive plaster cast, and cleaning the cast for painting.