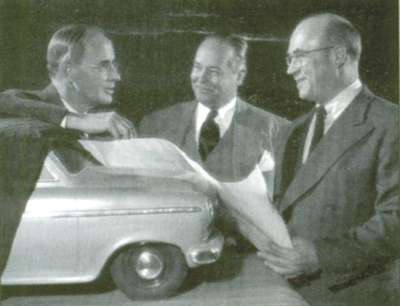 Considering that the 1949 Ford was a "make or break" car for the Ford Motor Company, it also had a lot of potential to make or break careers. When the car succeeded, many people wanted to take varying degrees of credit for it, especially in the design end. But amid all the claims, one of the participants in the 1949 Ford styling program born of the "two-Ford" policy had a solid clue to the car's parentage no further away than his garage for years.

The upheaval at Ford in the early 1940s had a devastating effect on Ford's Engineering Department. Chief engineer Larry Sheldrick resigned in 1943. Shortly thereafter, chief designer Bob Gregorie also left rather than work under Joe Galamb, Ford's long-serving chief body engineer, who was placed in charge of the Design Department when Sheldrick left.

One month before Gregorie's departure, the War Department arranged for Henry Ford II's release from the Navy in the hope he would return to Dearborn to take control of the family business. (News reports at the time suggested that one alternative being considered was for the government to place Ford under the control of another car manufacturer for the duration of the war.) Gaining control wasn't easy, but by April 1944, young Ford had been elected executive vice president.

That same month, he persuaded Gregorie to return by agreeing to work as closely with him as his father had -- and by agreeing to immediately "retire" Galamb. On September 21, 1945, thanks to the forceful insistence of his mother and grandmother, 28-year-old Henry Ford II was elected president of Ford Motor Company. Henry Ford signed the order that transferred his power to his young namesake. One of the first things "HFII" did was fire Harry Bennett -- and then he fired about 1,000 of Bennett's cronies.

At the same time Gregorie returned to Ford, Jack Davis, Edsel Ford's sales manager, who Bennett had previously banished to California, was also returned to power. He and Gregorie got along well and they quickly settled on a revised "two-Ford" policy for the first new post-war design. Thus, Ford's lineup, originally scheduled for introduction as 1948 models, included a so-called "Light Ford," a full-sized Ford, Mercury, Lincoln, and a Lincoln Cosmopolitan. As Gregorie explains it, the full-sized Ford was to be bigger and appeal to a "higher social class." (Also planned, but never totally developed, were a new Continental and a new Lincoln Custom.)

If there was a crisis at Ford when Henry Ford II took over, it was because the company had no infrastructure. What middle management there was had been fired or quit. Ford soon realized he was in over his head and needed help almost everywhere. He hired the "Whiz Kids," Tex Thornton's cadre of former Army Air Force officers, to begin instituting their brand of financial controls. To teach him how to run the company, HFII persuaded Ernest R. Breech to leave General Motors's Bendix Division and bring his years of experience in the automobile business to Ford as executive vice president. Breech, in turn, brought many GM executives with him, including Harold Youngren, who became Ford's new chief engineer.

Breech officially started on July 1, 1946; Youngren exactly one month later. Even before they officially became Ford employees, Youngren and Breech drove what was planned as the 1948 full-sized Ford. There's a debate about which one first told the other he thought it weighed too much and would lose money if sold in competition with Chevrolet and Plymouth. (Breech, Youngren, and other former GM executives hired by Ford knew that the next Chevrolet model would come out in 1949, and that it would weigh and cost less than the proposed full-sized Ford.)

Even though tooling had already been started for both proposed Fords, in September 1946, Breech recommended to the Executive Committee a fresh start on a new full-sized Ford design. As Breech saw it, the world was going to judge the company by the next new Ford it produced and it needed to be something spectacular. Breech then proposed to delay the introduction of the lineup for one model year, make Gregorie's full-sized Ford the new Mercury, and come up with an all-new Ford -- and that's exactly what happened.