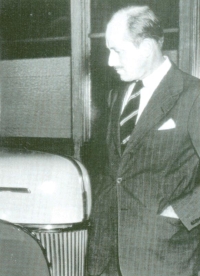 What makes the 1949 Ford so special? The short answer is that everything except the venerable flathead V-8 was new, from the design of the car to the suspension. It was the first "modern" car from Ford. More importantly, it told the world what to expect from the third generation of the Ford family that took over after the untimely death of heir apparent Edsel Ford in 1943, and the demise of patriarch Henry Ford in 1947. The 1949 Ford origins lie with Henry and Edsel, but it helped Henry Ford II, age 30 at the time of its introduction; Benson Ford, age 28; and William Clay Ford, age 23, establish themselves as leaders in the automotive industry.

The car was a solid hit in the marketplace at a time when the Ford Motor Company desperately needed one. As such, there's been much interest over the years in the 1949 Ford, interest that's been heightened by the tantalizing question of who designed the influential car's theme model, since four people have taken credit for it.

George Walker, the design consultant retained by Ford specifically to come up with ideas for the 1949 car, claimed credit because he sold the design to Ford's Executive Committee. Richard Caleal, whom Walker took aboard to broaden the scope of ideas from his design team, said the design Walker used to win over the Ford honchos was his, modeled on the kitchen table in the Caleal household. Robert Bourke, of Studebaker fame, lent resources and advice to Caleal. Bourke said he had a major hand in the Ford design, including its distinctive spinner-nose grille. Holden "Bob" Koto, one of the Studebaker staffers who helped Caleal with the mold and cast of the theme model, was given credit by Bourke for portions of the design.

There are no known photographs of the theme model and it disappeared after executive approval was given to the full-size reproduction of the table-top version. But one of the participants had in his garage for 40 years a key piece of physical evidence that, in recent years, has shed new light on the competing claims.

The design process of the 1949 model was tumultuous, but so were a great many other events at Ford in the Forties. In 1941, Edsel Ford and his chief designer, E. T. "Bob" Gregorie, were planning the car they expected to be the 1943 Ford -- had not America's entry into World War II changed everyone's priorities.

But Henry Ford's son was spending less of his time directing design work with Gregorie. Instead, he was spending much more time working with his father on labor issues and with the U.S. War Department on several large national defense contracts. This showed in lagging Ford sales in model-year 1941, when Chevrolet outproduced Ford by more than 317,000 cars, despite the fact that both featured all-new designs with larger bodies, longer wheelbases, and softer rides.

Of course, part of the problem must be attributed to Henry Ford's rejection of more modern engineering. Edsel had been president of Ford Motor Company since 1919, but the firm was really run by its founder, Henry Ford, in an authoritarian line organization. Henry overruled Edsel on many issues except those having to do with styling and running the Lincoln Motor Company. Sales and advertising were also Edsel's responsibilities.

Following a second stroke in 1941, Henry Ford became even more antagonistic toward Edsel. While Edsel was involved with the more complex day-to-day company problems, Henry was using security chief Harry Bennett to enforce his orders. This caused Edsel considerable grief, worry, and trouble, and was the underlying cause of Edsel's death in May 1943 at age 49. Edsel Ford was highly admired not only in Detroit, but nationally. However, Henry Ford had backed Bennett at the expense of his son. Bennett was now able to consolidate power either by firing many of Edsel's longtime managers or making it so difficult for them to continue working there that they chose to leave.