Studebaker was "First by far with a postwar car." Chrysler was last. In fact, Chrysler's 1949 models, including the 1949 Chrysler New Yorker Convertible, were identical to the 1948s. It wasn't until the spring of 1949 that Chrysler introduced its "Second Series" models -- the "real" 1949s.

Those expecting something totally new and exciting from Chrysler were disappointed. President K. T. Keller had decreed that Chrysler would shun fads in favor of stolid practicality. Excitement was not part of the formula.

Still, the new Chrysler was a handsome car in its own way, and recognizably a Chrysler. Befitting its price, it wore the company's most ornate grille: two heavy tiers of chrome bisected by smaller horizontal and vertical bars.

The key-start ignition was waterproofed.
credit

The semi-automatic Fluid Drive, renamed Prestomatic, required no use of the clutch except to downshift or to enter reverse, but it faced stiff competition from GM's automatics.

The new key-start ignition was waterproofed for wet-weather reliability. And in an age when manufacturers gave most everything trick names, Chrysler wooed its buyers with Safety-Level Ride, Hydra-Lizer shock absorbers, Safety-Rim wheels, Full-Flow oil filters, and Cyclebonded brake linings.

The Chrysler lineup was altered somewhat to upgrade the make's image. Aside from the Imperials and the Town & Country convertible, the New Yorker reigned at the top of the line.

A peek at the New Yorker's engine.
credit

Of course, not many people could afford a New Yorker ragtop back in 1949, so it's not too surprising that only 1,137 were built.

The New Yorker was a class act in 1949 -- even the name implies that this was Chrysler's finest. 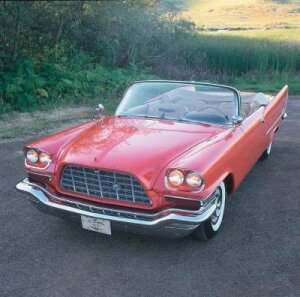