Thanks to a brilliant new V-8, the 1949 Cadillac Series 62 convertible was even more an object of desire in 1949. It also had tailfins, the new ultimate in Detroit styling.

In the words of a later era, Cadillac had it all together in 1949. The previous year introduced all-new styling with tailfins -- startling at the time, but soon widely imitated. Now Cadillac offered two more firsts in the luxury class: a brilliant high-compression overhead-valve V-8, and an equally predictive "hardtop convertible" model, the Coupe de Ville. If anyone doubted Cadillac's supremacy in the high-buck field, they were silenced in 1949.

The Coupe de Ville appeared in the mainstay Series 62 alongside Cadillac's sole convertible. At $3497, the new hardtop cost $55 more than the soft-top, but was just as rakish and glamorous. Though hardtops would ultimately dominate Cadillac sales, the convertible was more popular in '49 at 8000 units versus 2150. Either way, Cadillac's new 160-horsepower 331-cubic-inch V-8 delivered smooth yet lively acceleration. It was also lighter than its L-head predecessor, so handling improved as well. No wonder all '49 Cadillacs are still so highly prized by collectors. 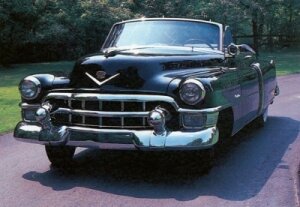