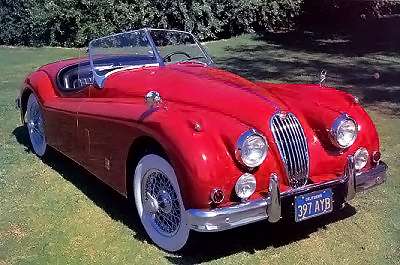 Introduced in late 1954, the new Jaguar XK-140 incorporated several of the engine mods developed for the racing program, which made the standard version quite similar in output and performance to the now-superseded XK-120MC. Competition experience has a way of showing up later on a manufacturer's roadgoing models, and so it was with the C-type engine and the next generation of Jaguar sports cars.

The same three body styles returned, and appearance was unchanged apart from heftier bumpers (a concession to the American market) and a longitudinal chrome hood strip running from the nose to the center of the split windshield. Other alterations included a switch to more precise rack-and-pinion steering, better brakes, higher rates for both the front torsion bars and the rear leaf springs, and adoption of the previous MC's special equipment as standard. Laycock de Normanville overdrive, controlled by a faciamounted toggle switch, appeared as a new option, and Borg-Warner automatic transmission was offered at extra cost late in the model run, which ended in early 1957.

There was also an MC version, announced in 1955, packing the same horsepower as the racing C-type. This car could spring from 0-60 mph in about 8 seconds and was some 5 mph faster flat out than its 120 predecessor. However, under pressure from American law enforcement authorities, Jaguar was forced to muzzle the lovely exhaust note on its tuned engine from a roar to a relative purr.

A changing market hastened the XK-140's replacement, which debuted in mid-1957 as the XK-150. This final variation on Sir William's stunning original design theme was Jaguar's direct reply to cars like the BMW 507 and the Mercedes-Benz 300SL, which offered similar performance and roadability while better catering to the growing American demand for more refinement and comfort.

Accordingly, the 150 was plusher and more civilized than any previous XK. The basic bodyshell was substantially restyled with higher front fenders, a wider grille, and a curved one-piece windshield. Critics bemoaned the heavier. more "matronly" appearance, especially since it was matched by a gain in curb weight, but fortunately the extra heft didn't spoil the good overall handling balance. Aside from a slightly larger 33-foot turning diameter, the familiar XK chassis was retained intact. However, Jaguar scored a production first by replacing the old fade-prone drum brakes with servo-assisted Dunlop disc brakes at each wheel, which easily compensated for the weight gain. It was another example of how racing can improve the breed, as discs had been used successfully on the competition D-type.

Continue to the next page to learn about the features found on the sporty and speedy Jaguar XK-150.