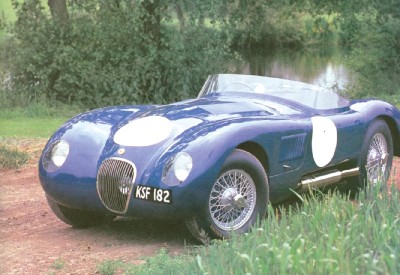 A meticulously restored example of the rare C-type competition roadster, which decisively proved the mettle of Jaguar’s advanced dohc six.

The heart of the Jaguar XK-120 -- and the main attraction for the technically minded -- was its engine: a lovely new inline six with dual overhead camshafts. The overall design concept for this advanced powerplant had been conceived during the war by Lyons -- later knighted by Queen Elizabeth II in partial recognition of this achievement -- along with chief engineer William Heynes. Both men recognized that fuel costs and car taxes would escalate once peace returned, so obtaining maximum power per unit of displacement became the main focus of their development effort.

To this end, engine designer Harry Weslake was called in near war's end to assist in the final engineering. The concern with efficiency and the precedent of several low-volume, high-performance European cars explains the decision to adopt the twincam configuration, even though dohc engines were hardly the norm in prewar British cars. It also explains Weslake's choice of large main bearings and hemispherical combustion chambers for the new six, which arrived with a displacement of 3,442cc (210 cubic inches).

While sports car buffs debated the merits of classic traditionalism versus progressive modernity, buyers were quick to endorse the new XK-120. Journalists on both sides of the Big Pond did too. If not the ultimate in engineering sophistication, this sensational Jaguar was unquestionably a state-of-the-art sports car -- and it was affordable.

Designated the XK-series in production form, the twincam six was one of 10 powerplants being considered for the new sports car by late 1947, all developed under the "XJ" project code. Actually, the most promising of the lot was a 1,996cc (121.8-cubic-inch) four of 80.5 x 98.0mm (3.17 x 3.86-in.) bore and stroke, and Weslake selected it as the basis for the eventual XK-120 engine. Though output was ample, some 145 horsepower at 6,000 rpm, the four would never be used in a production Jaguar. However, it did make history in an experimental MG.

At the request of Lt. Col. "Goldie" Gardner, the four was turned over to the Abingdon people, who slotted it into the EX-135 streamliner being prepared for an assault on the Bonneville Salt Flats. In a sterling test of Jaguar's dohc concept and Weslake's engineering savvy, this amazingly tough little engine propelled the then 63-year-old Gardner to numerous speed marks in August 1952, including an impressive 148.7-mph average for the 100 kilometers. This feat immediately touched off rumors that Jaguar was about to field a 2.0-liter challenger to Triumph's then-new TR-2 and similarly sized sports cars from Britain and the Continent, but Lyons and company had no such intent. Even so, speculation that a "little cat" was in the offing persisted through 1953-1954.

As noted, the experimental four was Weslake's choice as the basis for the production XK-series six. The transition was straightforward enough. First, two more cylinders were added and bore was brought up to 83.0mm (3.27 in.), yielding displacement to 3.2 liters (195.2 cubic inches). However, low-rpm torque was judged insufficient, so stroke was stretched to 106mm (4.17 in.), resulting in the final 3,442cc. With dual SU H.6 carburetors, the twincam six initially delivered an honest 160 horsepower at 5,200 rpm as installed, which was sufficient to see XK-120 prototypes to a maximum 120 mph, hence the model designation.

On the next page, learn how the XK-120's engine performed on the road.