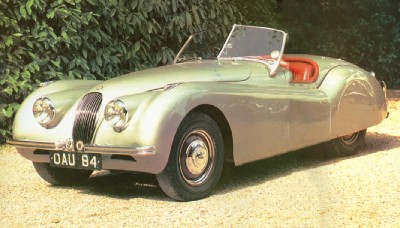 This beautifully restored 1950 XK-120 roadster wears the distinctive rear wheel-well covers and steel wheels that were standard on the normal-tune models.

The genesis of the Jaguar XK-120 can be seen in a 1938 experimental, a surprise exhibit that electrified visitors at that year's London Show. Designated "Jaguar 100," it was a strikingly streamlined closed coupe combining a rounded, two-place cockpit, sloped tail, and fulsome fender shapes with the SS roadster's long hood and fine-mesh vertical grille.

Many sports car buffs would have been happy with a postwar edition of this job, but there were many others who would have simply preferred a more powerful SS 100. As far as they were concerned, there wasn't a thing wrong with the "British traditional" sports car -- spartan interior, stiff ride, classic styling, minimal weather protection, and all -- especially for competition, where prewar MGs, Morgans, Singers, and HRGs again began dominating British hillclimbs and track events in the late Forties.

Significantly, SS 100s were also running again, and winning. When the ultramodern XK-120 arrived, many enthusiasts doubted whether the new streamlined beauty would be able to carry on its forebear's enviable racing record. Meanwhile, a number of the earlier cars had been purchased by cash-laden GIs, and the SS 100 quickly became part of the growing sports car phenomenon in America. No less a celebrity than the late Dave Garroway (the first host of TV's morning "Today" show) took to the SCCA circuits with a mildly customized roadster featuring alligator hides on seats and dash.

While sports car buffs debated the merits of classic traditionalism versus progressive modernity, buyers were quick to endorse the new XK-120. Initial sales were as strong as Lyons had anticipated, and a July 1948 production startup, well in advance of the new model's debut, ensured ample inventory and prompt customer delivery. Those customers found themselves in good company, for journalists on both sides of the Big Pond were quick to sing the praises of this sensational Jaguar. If not the ultimate in engineering sophistication, the XK-120 was unquestionably a state-of-the-art sports car -- and one that mere mortals could actually afford.

Classic long-hood/short-deck proportions on the XK-120 were enhanced at the front by large headlamps, harking back to the prewar SS 100.

Built on an extraordinary strong box-section chassis, the XK-120 featured fully independent front suspension of modern geometry -- upper and lower wishbones and longitudinal torsion bars -- in contrast to the old prewar leaf-sprung solid axle. At the rear was a live axle carried on unusually long semi-elliptic leaf springs made of silico-manganese steel. Girling telescopic shocks were used in front; piston units served at the rear. Brakes were British-made Lockheed drums with twin leading shoes and ample 12 x 2.25-inch dimensions. Adding to driver comfort and handling ease was a vastly improved recirculating-ball steering system. The large 17-inch-diameter steering wheel was mounted on a steeply raked Burman-Douglas steering column with four inches of telescopic adjustment via a screw-type collar. The driver and one lucky passenger sat in shapely bucket seats upholstered in top-grain cowhide and offering up to six inches of fore/aft travel.

On the next page, learn about the engines that powered Jaguar's XK-120 sports cars.