The End of the Allards 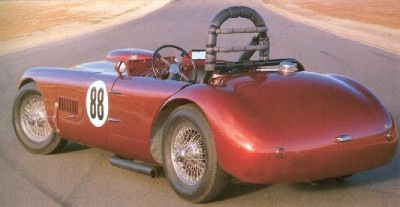 An Allard with a streamlined envelope body? Yes, it’s the 1953 Le Mans racer. This one was first raced at Bridgehampton in May 1953.
ggfiuyg

The end of the Allards: during the 13 model years (1946-1959) Allards were produced, sales brought modest success to the company, but the firm never was a great moneymaker. In the end, the need for lighter and more sophisticated racing machinery was at odds with both Allard's financial condition and Sydney's philosophical attitude about car design and construction.

When the production of Allard cars for sale to the public ceased, the company turned to producing its de Dion rear axle (minus the quick-change gear feature) for London County Council ambulances. The poor citizens who needed ambulance travel probably didn't know or care that the vehicle had an Allard-built de Dion axle, but if they were in pain they may well have appreciated the improved ride.

However, race fans everywhere can all thank Sydney Allard for some of the great racing excitement he helped provide in the 1950s. For example, well-known race drivers such as Bill Pollack, Erwin Goldschmidt, Fred Wacker, Mike Graham, Sam Weiss, John Gordon Bennet, and John Fitch all drove Allards at one time or another.

Perhaps Jeff Allison, writing in Vintage Motorsport magazine in 1990, summed it up best: "No matter what has been said about the Allard in the past, it is undeniable that the Allard J-Series cars were the right cars at the right time. They moved American racing from crude hot rods and specials to production-based sports cars. Not bad for a cycle-fendered ugly duckling with raw power, fierce acceleration, negligible braking, and sometimes very suspect handling-a mixed bag but still one of the most exciting cars on four wheels in its time."

Sydney Herbert Allard died in April 1966, shortly before his 56th birthday. And just as he died before his time, it can also be said of some geniuses that they were born before their time. In Allard's case, however, he may simply have been misplaced by 6,000 miles, an ocean, and a continent. With his knowledge and ability to extract performance from what was essentially a hot rod, and a not very sophisticated one at that, he should have been practicing his art in southern California. He would have felt right at home -- and very welcome as well.