The Introduction of the Allard J2-R 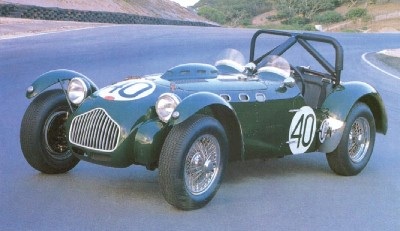 The J2-X differed little from the J2 externally. This 1951 model doesn’t sport the exterior spare tire, although it does have a large 50-gallon fuel tank.
vfyui

Now we consider the introduction of the Allard J2-R, the finest Allard.

During 1952 and 1953, Allard built both smaller and larger cars: the M2-X five-passenger cabriolet and the P2 five/six-passenger sedan, with a choice of Ford/Mercury or Cadillac V-8 engines, and the smaller 21-C Palm Beach with the inline four-cylinder ohv Consul engine or the 21-Z with the inline six-cylinder Zephyr powerplant (both Ford engines). And, finally, there was the K3, with a choice of Ford, Mercury, or Chrysler V-8s -- or the more exotic Jaguar inline dual-overhead-cam six. Whatever the engine, all of these models retained the coil springs, split front axle, and de Dion rear setup.

The final J model, the J2-R -- probably the best Allard ever made -- came in 1953. Its frame consisted of the four-tube assembly used for the Palm Beach model, but with a new de Dion layout at the rear that positioned the de Dion tube with twin A-brackets and parallel trailing arms on each side. The front axle assembly remained as before, with the split-I-beam Ford front axle and coil springs.

The Cadillac engine was modified to accommodate four twin-choke Solex carburetors, a high-lift cam with solid tappets, 9.0:1 compression ratio, and a special exhaust system, all of which combined to produce 270 horsepower at 4600 rpm. The mechanicals were complemented by an envelope body and a dry weight of 2200 pounds.

The J2-R was built solely as a sports/racing car, and Sydney Allard proved its performance potential when he led the first lap of the 1953 Le Mans race by a wide margin. He continued to lead for three laps before a broken brake line put the Allard out of the race. Only seven of these J2-R Allards were built, most of them going to the U.S. or Canada.

Note the racing-style fuel filler cap and mirrors, the “louvers” on the backside of the front fenders, and the row of small gauges on the passenger’s side of the dash.
vbguig

Unfortunately, the J2-R was too much too late. By the time this relatively heavy machine got into competition, the Ferraris, Jaguars, Maseratis, and Aston Martins were becoming lighter, riding more sophisticated suspensions, and -- in some cases -- running with more power. The Jaguars also featured better brakes: Dunlop disc units from the C-Type model.

To read about the end of the Allards continue on to the next page.