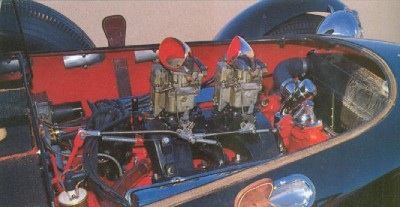 This J2 was equipped with a Cadillac V-8 fitted with dual carburetors and is shifted via a 1937 LaSalle transmission.
hiouyh

From 1950 on, Allards were available with either a Ford or Mercury V-8, the difference being displacement (3622 cc compared to 4375 cc, respectively) and horsepower (85 to 110). Many of the engines were army surplus units, rebuilt and modified at the Allard Clapham works. The Allard Mercury engine eventually received dual carburetors and high-compression cylinder heads, both copied from American speed-equipment manufacturers: the manifold from Eddie Meyer, the heads from Eddie Edmunds. Interestingly, a friend of the author bought a K3 Allard, and wanted to install Edelbrock equipment on the engine. The dual manifold was no problem, but the Edelbrock Mercury 24-stud heads wouldn't fit because the cylinder block was set up for 21-stud heads. The only U.S. Fords to use this type of block were the 1937 and early 1938 Fords -- no Mercury ever had 21-stud heads.

All of these automotive activities by Allard were taking place at a time when the British auto industry was still trying to get over the effects of war. Steel remained in short supply, and the car companies seemed to be seeking the most profit from a pound of steel rather than trying to develop new cars. How else can one explain the hapless Ford Pilot or Austin Sheerline?

As bad as this situation was for the general car-buying public, it was good for Allard's business. Fortunately, Allard was smart enough to realize that the seller's market wouldn't last forever, and he knew that he had better produce a new and better car before the existing conditions changed. Allard thus went to the United States on a research trip, returning to England having learned two things he hadn't known before: Americans wouldn't buy his existing models, but they might buy an updated version of his original model J.

The Allard J2 seen here was a successful racer, winning its first eight outings, including Pebble Beach in 1951 and 1952.
biug

The result of this was the J2: the car that put the Allard name in the winner's circle in sports car racing, and on the map as far as racing fans were concerned. Retaining the 100-inch wheelbase of the original J, as well as the split I-beam front axle used on all models since the war, Allard replaced the transverse leaf springs with coil springs front and rear. In addition, a de Dion axle with a quick-change center section and inboard 12-inch Alfin brake drums were featured at the rear. The radius rods that had previously located the live rear axle now served as locating members for the de Dion dead axle beam.

Dry weight of the J2 could be as low as 2000 pounds, but never went over 2600, even when equipped with one of the big American overhead-valve V-8s.Production of the Allard J2 and J2-X never amounted to much, but their reputation over the years has been such that they're now very expensive collectibles.