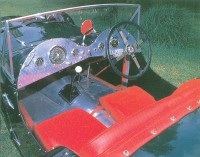 The J2 cockpit was spartan, with the speedometer on this early right-hand-drive model placed on the passenger’s side.
nih

Here we consider the design of the 1949, 1950, 1951, 1952, 1953, and 1954 Allard J2. Pre-World War II Allard Specials (none were called simply Allard then) were primarily built for "mud plugging," as the British call that peculiar sport, but other uses were obviously on Allard's mind. The ultimate version featured a Lincoln-Zephyr V-12 engine. Only three were built, and sold for 570 pounds sterling, or $2850 at the prewar exchange rate.

By 1938, serious production was considered, particularly in light of the success of the Hudson-powered Railton in England. Allard therefore readied a V-12 roadster and a four-place V-8 for the 1939 London Auto Show. But war was imminent, and the show was cancelled-along with Allard's' production plans. In all, 11 Specials, mostly with Ford V-8s, were reportedly built before the war.

During the war, Allard made an attempt to sell the British War Office a modified version of his Special as a sort of jeep-type vehicle. When that approach was rejected, he kept his shop busy repairing Ford trucks for the military. After the war in Europe finally ended, Allard quickly got back to building his Specials, now in a new factory in Clapham, another London suburb. Though the world was ready for new cars again, England -- along with most of the rest of the world-faced shortages of steel and aluminum. Needless to say, both were badly needed by Allard. Like other manufacturers, Allard used what he could get, and he did somehow manage to get models into production.

In an age where longer, lower, and wider were becoming the norm, the Allard J2, here a 1951 model, was a styling anachronism with its free-standing headlights and cycle-style fenders.
vfvyu

The first postwar models were the K, L, and M. The first, with a 106-inch wheel-base, was just like Allard's prewar J1, but six inches longer overall. The L and M were another six inches longer, due to their four-seater bodies. All three models had what we would call convertible coupe bodywork, English-made flathead Ford V-8 engines, and Ford running gear with the Allard split front axle. Springs at both ends were transverse leaf, as on Henry Ford's cars. The three models were built through 1950. Since these cars were heavy, the stock Ford V-8 left them with anemic performance, at best. Alas, the next Allard -- the P-type, a luxury sedan first introduced in 1949 -- was even slower. In spite of its lackluster performance, however, Sydney Allard piloted one in the 1952 Monte Carlo Rally, and he surprised everyone by taking first place. His trials experience obviously helped a great deal on the last stage of the "Monte," which was virtually all glare ice, for it was reported that Allard covered most of the distance motoring sideways!

For more information on the design of the 1949-1954 Allard continue on to the next page.