by the Auto Editors of Consumer Guide
Prev Next 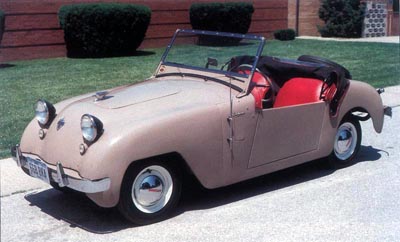 Super Sports remained in the line until the end of Crosley production in 1952.

Early in 1949, Crosley switched from pressed steel to the CIBA configuration for his 1949-1952 Crosley Hotshot and Super Sports. Engine design, displacement, and power remained identical, but the CIBA engine weighed a bit more --150 pounds dry.

To complement its advanced engine, Klotsch decided that the Crosley sports car needed a superior braking system. He'd read about spot disc brakes being used on aircraft, and he easily convinced Powel Crosley to adapt them for automotive use. Thus, in late 1949 and 1950, all Crosley cars and trucks, including the Hotshot and Super Sports, came out with Goodyear-Hawley "Hydradisc" discs at all four wheels.

These brakes worked well under most conditions, but they also had some drawbacks. To quote Klotsch: "[They] were developed by Jesse Hawley and originally used on light aircraft. Hawley also had them on a few experimental cars. They were fine brakes, but, unfortunately, Powel and I never guessed that in Detroit around 1949 [in winter, the city] would start salting the streets. And those brakes just froze up when the salt hit them. Then next they salted Chicago and eventually all the northern cities, and the exposed discs just didn't work. In the South, the disc brakes were marvelous, and for racing, too."

For 1951 and 1952, Crosley reluctantly switched to Bendix drum brakes all around.

With its stock CIBA engine, a Hotshot or Super Sports topped out at around 77 mph. Stripped down for road racing and with a higher axle ratio, it would do 90 mph on the straights. Its unorthodox suspension -- which consisted of a solid front axle with two semi-elliptic leaf springs; coils at the rear plus single-leaf quarter-elliptics for location -- gave amazing road-holding. And the Crosley suspension could easily be jacked around to suit particular race courses.

Some people believe the Crosley roadster's styling was done by Count Alexis de Sakhnoffsky. Not so. Sakhnoffsky did do advertising illustrations for Crosley, but the styling itself came from the combined efforts of Powel Crosley and Sundberg & Ferar, the industrial design firm in Southfield, Michigan.

Carl W. Sundberg was a friend of Crosley's and had helped him style the first postwar sedans. The first sedans that rolled out of Marion wouldn't fit two abreast inside a railway boxcar, so Crosley unceremoniously sliced two inches off the sides of his cars, which gave them a rather squeezed look, but did allow them to ride side by side when shipped by rail.

The roadster, though, was styled several years later. John Tjaarda, of all people, was paid $5,000 to submit dashboard designs for the Hotshot, but they weren't used. Instead, Sundberg and Crosley again did most of the styling.

With an 85-inch wheelbase, the roadsters got a five-inch-longer stretch than the passenger line (though overall length was from eight to 11.25 inches shorter), and most of its body components -- headlights, hood, seats, windshield -- unbolted for racing.

The design turned out as light and simple as possible, even to the elimination of a visible radiator grille. A separate grille, Crosley reasoned, would only have upped the price.

During its final four years of production, Powel Crosley poured $3-5 million of his personal bank account into his auto company. It had been losing steadily since its peak sales year of 1948. On July 3, 1952, production stopped. Ten days later, Crosley sold out to General Tire Corporation, which subsequently became Aerojet-General.

The Crosley emblem is a reminder of this bygone classic.

Aerojet-General soon sold all Crosley equipment, tools, dies, and leftover parts (except engines) to a big Cincinnati salvage operation. Replacement parts were resold to various dealers, most of them to Service Motors in New York. Service Motors also got the body dies, which were eventually scrapped.

Meanwhile, Aerojet-General kept building and supplying Crosley engines to the government and at the same time set up the Aerojet Marine Engine Division, which converted Crosley engines for use in boats.

When Aerojet-General got into missiles in the mid-1950s, it sold the marine unit to truck manufacturer Lou Fageol in Kent, Ohio. Fageol then took over Crosley engine production, again supplying powerplants mostly to makers of water-craft, and he also built the Pepco supercharger for Crosleys.

Around 1957, Fageol sold out to Burke Crofton in San Diego, California. The Crofton inventory included 2,000 engines but no manufacturing equipment.

Between 1959 and 1962, Crofton produced an improved version of the Crosley Farm-O-Road mini-Jeep, which he called the Crofton Bug, building some 250 in all. Crofton later sold Crosley marine conversions. Crosley powerplants were then used by Homelite in boats and later as the "Bearcat 55" by a company named Fisher-Pierce.

Powel Crosley, Jr., passed away quietly at age 74 on March 28, 1961, just before the start of a baseball season in which his beloved Reds would wind up as National League champions. (Crosley Field remained the team's home until 1970.) Today, his legacy continues in such institutions as the Crosley Automobile Club and a line of Crosley appliances headquartered in North Carolina.