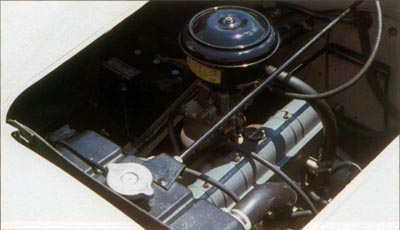 The development of the 1949-1952 Crosley Hotshot and Super Sport Engine is a story that has its roots in the company's postwar evolution.

Crosley had no trouble selling his automobiles immediately after the war, but as new and late-model used cars became more available generally, Crosley sales slipped.

Powel Crosley pumped millions of his personal fortune into his auto business before selling out in 1952. In all, some 70,000 Crosley automobiles were built, including 2,498 Hotshots and Super Sports between 1949 and 1952.

Despite their modest numbers, Powel Crosley's roadsters probably represented his greatest automotive achievement. He took an avid personal interest in their engineering and styling, and was very pleased with the way they turned out. Crosley and his chief engineer, Paul Klotsch, essentially created the Hotshot around two bulletproof essentials: the ohc engine and a set of disc brakes, both highly unusual at the time.

Through 1950, Crosley roadsters were furnished with four-wheel Goodyear-Hawley disc brakes.

But let's look a bit more closely at how the Crosley CIBA engine evolved. The earlier sheet-steel Cobra engine was based on designs developed by Lloyd M. Taylor, a San Francisco engineer and inventor who, around 1942, had built a six-cylinder engine using his layered head/block principle and managed to get it tested by the Navy in Annapolis, Maryland.

Klotsch heard about these military tests and went to Annapolis to see how the engine performed. He talked with Taylor and ultimately brought him back to Cincinnati. Taylor then helped develop the Crosley Cobra engine, although he at first wanted to make even the crankcase of pressed steel, with stamped connecting rods and the crankshaft made up of screw-machine parts. Klotsch and Crosley nixed those last innovations but decided to produce engines with layered, integral blocks and heads.

During World War II, Crosley built six four-cylinder Cobra test engines and sent them to Annapolis for Navy evaluation. The Navy was taking bids for a self-contained portable generator that could be airlifted to ground troops. The generator had to weigh no more than 100 pounds complete, and the engine had to run for 50 hours at a constant 5,000 rpm.

The Cobra engine did all that and more, and Crosley won the contract. Later, this engine was used to power all sorts of other things, from military amphibian vehicles, to truck refrigerators, boats, and even Mooney Mite airplanes.

Among the amenities in the Super Sports and Hotshot models was a Crosley radio.

After the war, Crosley based his postwar passenger vehicles on the Cobra ohc four. This engine, he demonstrated, could be frozen solid without the block cracking. But at first, it wasn't built to last any longer than the Navy's specified 50 hours, so certain modifications had to be made, notably on the valve-seat inserts.

Paul Klotsch, who'd retired by the 1970s, explained, "It still wasn't a dependable engine, even in early production. You see, the weak point was between the intake and exhaust valves, and to make that a heavier gauge would have required over $1 million worth of die changes. The [Cobra] engine stood up all right except when it was low on water, and then it burned out. But if it was well serviced, it was good for 60,000 miles."

For more on the 1949-1952 Crosley Hotshot and Super Sports, continue to the next page.