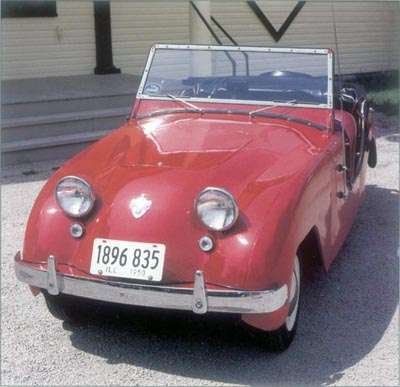 Powel Crosley, Jr., owner of Crosley Motors, was born in Cincinnati on September 18, 1886. When he was 13, he and his younger brother, Lewis, built an electric go-kart. At 21, he tried to promote an automobile called the Marathon 6, but a Wall Street panic cooled off his backers.

By 1914, Crosley was building cycle-cars, a venture that convinced him of the small car's practicality. By training, he was a lawyer, but his natural gifts made him a first-rate practitioner of sales and marketing.

Immediately after World War I, Crosley amassed his first fortune by inventing and selling "Inside Tires" via mail order. Inside Tires were liners that fit between the inner tube and carcass of conventional tires.

In 1920, when his young son asked for a radio, Crosley built him a crystal set. He became fascinated with radios, developed a five-tube receiver, and soon sold millions of them at $19.99 each, this at a time when other radios cost upward of $80.

By 1922, the Crosley Radio Corporation had expanded into one of the world's largest. Powel Crosley himself became a disc jockey on his own radio "super station," which, between 1934 and 1939, with 500,000 watts of power, could be heard as far away as Australia.

When the radio business started getting crowded, Crosley diversified. An inventor came to him one day with an idea for a refrigerator with shelves built into the door. The inventor had been turned down at Frigidaire and Kelvinator, but Crosley liked the idea and offered the man a 25-cent royalty on every "Crosley Shelvador" sold.

The inventor said no, that he'd rather have $15,000 cash. Crosley sold four million Shelvadors, which would have brought the inventor $1,000,000.

Not everything Crosley touched turned to gold, though. Among his flops were the Xervac, a mechanical scalp exerciser; the Koolrest, a bed cooler; plus a low-priced camera, an oil burner, and a coal stove.

Crosley usually wore a sad expression and rarely looked happy. Gregarious and outgoing, his best friend remained his brother, Lewis. Fortune magazine said of Powel Crosley in 1947, "Once the creative phase of the operation was completed, Crosley would preoccupy himself with other interests, usually automobiles. The pursuit of leisure also failed to satisfy him. With country places in four states, he lived an unrelaxing schedule, dashing from one to another. He tried fashionable sports, but polo bored him and his private airplanes quickly became mere conveniences. He won few intimates outside his immediate family. ...

"In the stands at Crosley Field, he is the most inhibited of all fans. Now that he is an automobile manufacturer, however, his associates detect a change in him. He is still restless and lonely, but when, as his own test driver, he jackknifes his 6-foot-3, 205-pound frame through the 45-inch door of a Crosley ... he comes into new focus, a man at peace with his convictions and pleased with his handiwork."

Hotshot styling was the work of Powel Crosley, Jr., and his friend, Carl Sundberg.

Crosley Motors, Incorporated, began assembling minicars in Richmond, Indiana, in 1939. These prewar models carried air-cooled Waukesha twin-cylinder engines and were stark. Initially, Crosley tried to distribute his minis through department stores, but the idea flopped, so he created a dealer network of sorts. Many Crosley dealerships grew up as extensions of filling stations and auto repair shops.

World War II stopped Crosley car production, but in 1945, after seeing the Cobra engine born for military use, Powel Crosley decided to go back into the business of making small cars, this time in Marion, Indiana, though company headquarters remained in Cincinnati. Crosley sold all his other holdings -- everything except the Reds baseball team -- and gave his full attention to the car business.

To see how Crosley's focus paid off, continue to the next page for more on the 1949-1952 Hotshot and Super Sports.