Advantages of the 1949-1952 Crosley Hotshot and Super Sports 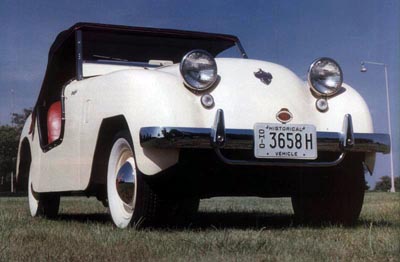 This 1949 Hotshot is from the car's debut year.

There were several advantages of the 1949-1952 Crosley Hotshot and Super Sports. One of the Crosley's big pluses was price, especially for budget-minded racers. The factory sold bare chassis for $794, and in 1949 dealers offered complete, street-ready Hotshots for $849.

Prices soon topped the magic $1,000 mark, but even by 1952, a Super Sports, fully equipped, cost only $1,028.72. (The main difference between Hotshots and Super Sports: The latter came with deluxe trim, a folding top instead of take-apart roof bows, and standard doors.)

Engine modifications were just as easy on the wallet. The Braje Company of Los Angeles supplied hot cams for $25, headers for $28.35, and dual intake manifolds with sidedraft Amal motorcycle carburetors for approximately $60.

A stock Hotshot (right) logs some track time against a stripped-down, "race-ready" version in 1951.

The cast-iron Crosley block would take a 0.130-inch overbore and, with a Weber stroker crank, displacement went from the stock 44 cubic inches to 53 (and later to 60 in boats). H&C and Vertex both made hot Crosley ignitions, and S.CO.T offered a Roots-type supercharger for $327.50. The blower alone raised horsepower from 26.5 to 55.

The cast-iron Hotshot/Super Sports engine, called CIBA (for Cast Iron Block Assembly) was the successor to an earlier Crosley powerplant that was uniquely made up of stamped steel sheets. This earlier engine, dubbed the Crosley Cobra ("Cobra" for COpper BRAzed), used 125 thin steel stampings brazed together in a 2,060°F furnace. With its nondetachable head, the Cobra block assembly formed a single, lightweight, layered unit.

The Cobra engine's cylinder sleeves were iron and the crankshaft rode in five beefy main bearings. This engine, like its cast-iron CIBA heir, boasted a shaft-driven overhead camshaft and full-pressure lubrication. Bore and stroke being over-square helped keep down friction and wear.

The Crosley Cobra block and integral head tipped the scale at all of 14 pounds. Fully assembled, the engine weighed only 138 pounds. Conceived for the military, the Cobra four was designed to run at a constant rpm. In cars, the varying rev range caused valve-seat inserts to crack, and the block tended to warp if the coolant fell below a certain level. Also, electrolytic action between the steel and copper layers could cause leaks.

Ralph Deshon wins the Sam C. Collier Memorial Trophy after a 1951 endurance race in a Hotshot.

So, in 1949, Crosley went to a cast-iron version of the Cobra engine, still with a nondetachable head, five mains, and overhead cam. The iron engine weighed 12 pounds more than the Cobra, but displacement and power stayed the same. The Crosley engine, in both versions, displaced 720cc. Hotshots punched it out to 748cc so it fit neatly into 750cc racing classes.

Cars had always been Powel Crosley's consuming passion. His career started and ended with them. In between, while he pursued those "other projects" -- the ones that brought him all his millions -- he felt he was just marking time until he could get back to automaking.

Crosley became one of Cincinnati's richest citizens -- the richest, said some -- through a series of entrepreneurial successes. He got into mail order early, likewise home radios, refrigerators, television sets, and fax machines. He owned the nation's most powerful radio station, WLW, and the Cincinnati Reds baseball team, but these were mere interludes.

For more on Powel Crosley, Jr., continue to the next page.