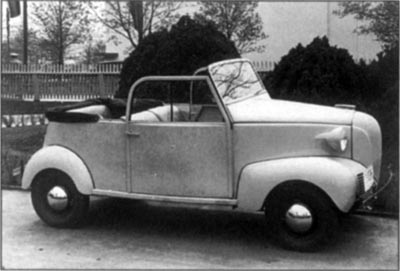 The Hotshot owed its existence to prewar Crosleys like this 1940 convertible. See more pictures of classic cars.

The 1949-1952 Crosley Hotshot and Super Sports history is a fascinating tale that begins with one man. Powel Crosley, Jr., got rich in other industries, but his first love (with apologies to the Cincinnati Reds baseball team) was automobiles. Once he had a distinctive ohc four-cylinder engine and disc brakes, he was able to turn his economical minicar into a winning sports car.

Before the Chevrolet Corvette finally entered racing in 1956, America's only true postwar sports car was the tiny Crosley Hotshot. Despite almost no factory support, no team, and no organized competition program, a handful of private owners took to the tracks in 1949, secure in the knowledge that Cincinnati, Ohio, industrialist and baseball club owner Powel Crosley, Jr., built the best darn production sports cars in America. And while their racing rivals might have snickered, this brave band of independent drivers managed to rack up a surprising number of victories.

For example, in 1950, a stock Hotshot, with its ohc engine and standard four-wheel disc brakes, won the Index of Performance at Sebring. Another won the Grand de la Suisse in 1951. Yet another placed second in that same year's Tokyo Grand Prix. Most amazing of all, a modified Hotshot was on its way to winning its class and the Index of Performance at Le Mans in 1951 when its voltage regulator fried late in the race.

Builders of specials also dropped Crosley engines into everything from Bandinis and Morettis to Siatas. A Siata/Crosley won the 12-hour Sports Car Club of America (SCCA) Vero Beach race in Florida, and a Bandini/Crosley took the six-hour race that started halfway through the 12-hour event.

Knocked-down Crosleys were assembled in this auxiliary plant in Monterey, Mexico (circa 1950).

Many Crosley roadsters were driven daily and then raced on weekends. Stock, a Hotshot or Super Sports weighed a bit less than 1,200 pounds. For racing, most owners removed the bumpers, windshield, headlights, spare tire, and one seat. This brought weight down to 996 pounds. Some Crosley specials weighed as little as 750 pounds.

To learn more about the advantages of the Hotshot and Super Sports, continue to the next page.