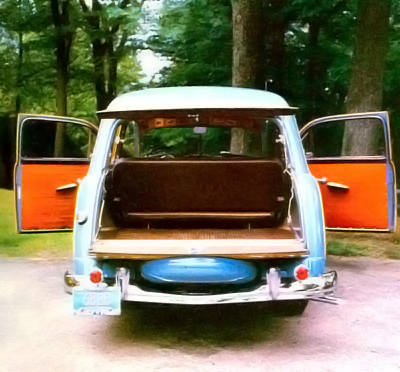 The woody wagons had ample space in the back for storage.
Publications International, Ltd.

It has been said that the Ford Mercury woody wagons looked rather like boats. This may be due in part to Gregorie's love of yachts. He was trained as a naval architect, and when he left Ford in December 1946, he returned to designing yachts.

It has also been said that the 1949 wood-wagon body was so heavy that it must have been originally intended for Mercury. This is quite correct. As noted, the 1949 Mercury was supposed to have been that year's Ford, and it turned out to be the better-performing of the two wagons. The Ford version has some peculiar qualities.

For example, its rear section is so heavy that the front feels quite light, and the car handles almost like it has power steering. The 100-horsepower Ford flat-head V-8 is coupled in the wagon with the 3.91:1 Mercury rear end instead of the 3.73:1 setup used in other models.

The engines are nearly identical, of course, but a 0.25-inch longer stroke gives the Mercury 10 more horsepower than the Ford. And the Ford really needs that, because it weighs 3543 pounds, a mere 83 pounds less than the Mercury.

The only body difference between the two is that the upper portion of the Mercury's front door is tucked in at the cowl to meet its lower fenderline.

Complete steel bodies for both 1949 wagons were shipped to Iron Mountain, where the wood outer panels were added. Whereas the earlier body framing was made from solid pieces of maple, the 1949 frames were constructed with an elaborate electrobonding process.

Door frames, for example, were formed by a radio-frequency bonding press applying pressure to a loose package of resin-coated wood plies, then radiation-energy laminated into a frame pillar blank. The process utilized eighteen 75-ton laminating presses.

At the time these cars were built, dealers were supplied with replacement wood. The idea was that as the wood frames and panels deteriorated, owners could replace them with new wood from dealers.

But few owners stockpiled wood, and eventually dealers simply threw out the old stock. Thus, restorers may have a difficult time finding new-old stock wood today. Replacement pieces can be made, but they will not be laminated.

Go on to the next page to learn about the legacy of the Ford Mercury woody. 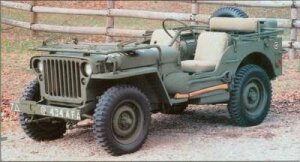