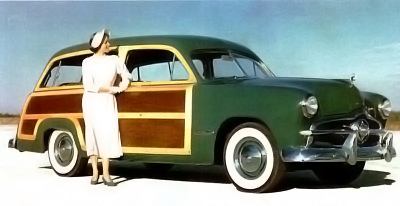 As late as early 1947, Ford's postwar planning did not just include the Ford Mercury woody; Ford envisioned four separate car lines. Besides a compact "light car" there was to be a standard Ford on a 118-inch wheelbase, including Gregorie's wood/steel two-door wagon and convertible.

A brace of Mercuries on wheelbases of 120 and 123 inches was also scheduled, again with these body styles, though the wood/steel Sportsman convertible was more closely related to Mercury's production 1946-1948 woody ragtop than the new wagon.

Finally came Lincoln, with a standard wheelbase of 125 inches, Custom or Cosmopolitan models on a 128-inch chassis, and a 132-inch-wheelbase Continental and limousine.

A Sportsman-type convertible was targeted for the standard Lincoln series, while the Cosmopolitan line would get a smart wood/steel sedan, both apparently intended as replies to Chrysler's 1946-1948 Town & Country offerings.

With all this, woodies figured very heavily in Ford's postwar thinking. Yet except for the wagons, none of these models ever appeared. What happened?

In 1945, newly installed company president Henry Ford II brought in Ernest R. Breech from Bendix and GM to be his second in command. Breech was never very comfortable with Gregorie's Ford designs; he felt they were much too heavy and ponderous.

In August 1946 he told Ford's policy committee that the new Mercury should be based on the proposed 118-inch-wheelbase Ford and that the two Mercurys should be combined to form the smaller Lincoln series. The Cosmopolitan would stay at the top of the Lincoln line.

He also recommended a totally new Ford be designed from scratch on a 114-inch wheelbase and declared it should be the company's top priority.

The committee bought all of Breech's proposals. Both Gregorie and an outside group headed by George Walker now submitted proposals for the new 1949 Ford. Except for minor details, their designs were quite similar because a very tight package had been set down.

Ultimately, the Walker group's model was chosen. Gregorie again left the company because of this and other differences with Breech, though his departure was an amiable one.

The 1951 Ford and Mercury wagons set an all-time high in FoMoCo woody production. They were the most expensive models in their lines, but they also had the poorest resale value.

Engineering work for the 1949 Ford now moved ahead at full speed, a crash campaign unprecedented in the industry at that time. Everything else was secondary in Dearborn, and a lot of plans were left by the wayside, including the compact Ford, a coupe, and a whole fleet of fastbacks.

The Continental project was tabled indefinitely, and there was no hope for the woody sports wagons, convertibles, or sedans. The reason given in each case was cost effectiveness: Ford Motor Company was losing nearly $10 million a month at the time, so the need to economize was obvious.

The only woody project to reach production was Gregorie's station wagon, his basic body design being developed for both the 114-inch-wheelbase Ford and 118-inch-wheelbase Mercury chassis that appeared for 1949.

Go on to the next page to learn about the production of the postwar Ford Mercury woody.