Design and Production of the Ford Mercury Woody 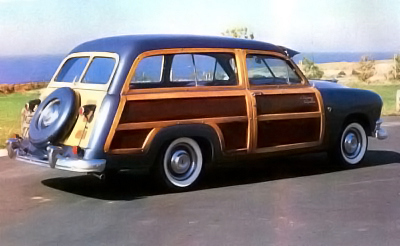 The wood framework on Ford's 1949-1951 wagons was put together with multiple pieces of planking instead of solid pieces.
Publications International, Ltd.

During the heyday of the Model T Depot Hack and other commercials, Ford had depended on outside suppliers for its wood bodies, firms such as Seaman, Columbia, Martin-Parry, Mifflinburg, and York. It was only when Ford introduced its first "real" station wagon in 1929 that it began to use Iron Mountain. Even then, the wood for the Ford Mercury woody was only cut and formed there.

Actual body assembly was carried out by Briggs or Murray of Detroit or Baker-Rawling in Cleveland. These Model A wagon bodies were made of maple with birch or gumwood panels. They were four-doors, with piano hinges at the A- and C-pillars so that the rear doors opened "suicide style."

Only the windshield was glass. All other window openings had canvas curtains with small plastic openings that limited visibility. Just a few wagons were built in 1928. The first year that Ford mass-produced wagons was 1929, when it built 5200 in all. From that point on, Ford was America's undisputed "wagon master."

Production of Ford woody wagons continued through 1951. Ross Cousins, an artist in Ford Styling from 1938 through 1948, recalls with amusement, "It was not a very practical venture, but it was always interesting. I'm sure they lost money on it, though I don't think they ever knew how much."

Evidently, the company discovered that it wasn't very economical to produce its own wagons, because it contracted the Mingel Company, a furniture manufacturer in Louisville, Kentucky, to build wood wagon parts from 1932 to 1935. Briggs and Murray still assembled the bodies in Detroit.

In 1933-1934, the wagon body was altered somewhat, and both front and rear doors were of the suicide type. For 1935, Ford went back to producing its own body parts at Iron Mountain, with Murray doing the assembly.

The 1935-1937 bodies were virtually the same. All doors now shut at the B-pillar, as they had done from 1929 through 1932. However, the body changed considerably from previous years, and all the ribbing was now horizontal.

For the 1935 models, crank-up glass windows were newly featured in the front doors, though canvas curtains with large plastic panels were used for the rest of the openings. Also for 1935, the spare tire was mounted on the tailgate. It had previously been carried on the left (1929-1931) or right (1932-1934) front fender.

Late-1936 wagons could be ordered with glass rear windows as an option, and Ford scored a first with a swing-out rear window for 1937. For 1938 the body again changed slightly and the spare moved inside, mounted behind the driver's seat. For 1939 there were two Ford woodies, Standard and DeLuxe. Up to this point, the woody had been considered a commercial vehicle.

Between 1937 and 1939, all the firm's wood-body operations were moved to Iron Mountain. Timber now literally went in one end and came out the other as a complete woody body, including metal cowl, instrument panel, and floor.

For 1940 there was another new body design, less angular than before and with rear doors hinged at the B-pillar. The spare tire returned to its previous tailgate mounting, which would be retained through 1951. The body was altered again for 1941, becoming more solid and simplified and now with mahogany panels and maple or birch frames.

Go on to the next page to learn about the evolution of the Ford Mercury woody.