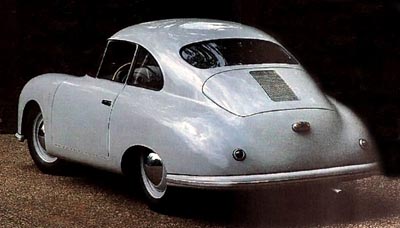 Two of Dr. Ferdinand Porsche's ambitions were to build an economical car for the masses and to build a sports car. The Volkswagen Type 1 "Beetle" fulfilled the first ambition and provided the means to realize the second -- the Type 60K10, which would be the basis for the 1948 Porsche 356/2 coupe.

Porsche designed the Type 60K10 on a stretched Beetle floor plan with a hotter VW engine to compete in a Berlin-to-Rome road race planned for September 1939. The race was canceled by the onset of World War II that same month.

Soon after the war, French authorities imprisoned Porsche on charges of war crimes. His son, Ferry, was left with the tasks of bailing his father out of prison and keeping the family auto design business going.

By the time Ferdinand Porsche was freed, Ferry Porsche (who died early in 1998, the Porsche marque's 50th anniversary year) was developing two sports car prototypes. The 356/1, a mid-engine roadster, didn't go beyond the prototype stage. The rear-engine 356/2 became a production car and established a layout and style echoed to this day in the latest Porsche 911.

Volkswagen components were the basis for the Porsche 356/2 design.
porsche

The 356/2 followed the example of the prewar Type 60K10 by using Volkswagen components with a streamlined body. The rigid floor plan was unique to Porsche but designed so the standard Beetle front and rear suspension assemblies would bolt right in.

The Beetle's four-wheel independent suspension with torsion bars was advanced for its time. Some expensive sports cars were still using solid axles with leaf springs. Testing on mountain roads produced a rugged car that handled well.

The 356/2 was a rugged car that handled well on tough roads.
Porsche

Ferdinand Porsche's philosophy was that the power-to-weight ratio was more important than absolute power. With a weight of around 1,300 pounds, the 356/2 could do almost 90 mph, yet gas mileage and reliability remained Beetle-like.

The 356/2's interior was simple but effective.
Porsche

Until 1950, Porsches were made in a converted sawmill in the village of Gmiind, Austria, where Porsche had taken his staff in the last year of the war to avoid Allied bombing. For car making it was too remote and not equipped for any kind of volume production. (The car featured here was one of only four 356/2s produced in 1948.)

The extensive handwork used at the small plant kept prices high in spite of the use of Volkswagen components. Coupes cost $3,750 and cabriolets $4,250. Cabriolets and some coupes were sent to outside coach-builders for bodies.

Our feature car was built entirely at Gmiind. Owner C. A. Stoddard, of Novelty, Ohio, says it is "the oldest known production Porsche in the world."