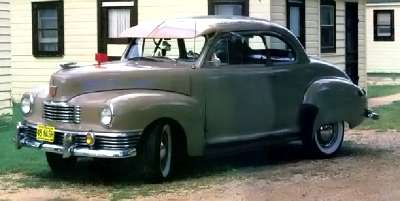 Business coupes like the 1948 Nash 600 most often occupied the bottom rung in every automaker's ladder, always the bare-bones, lowest-priced model offered. With just a front bench seat and lots of room for samples behind it, they found favor with traveling salespeople; Chevrolet, for example, built 18,396 in 1948 alone.

Curiously, 1948 was the only postwar year Nash offered one, and it was stripped: no chrome trim, hood ornament, back seat, turn signals, sun visor, or passenger's armrest. A retired Nash worker even claims one rolled off the assembly line with a wooden plank bumper.

Why then is the 1948 Nash 600 DeLuxe business coupe featured here dressed to kill?

This stylish 1948 Nash 600 has all the options that allowed its salesman owner to travel in comfort.

Owner Sharon Bielefeldt, of Waukesha, Wisconsin, explains: "The original owner of my Nash was a traveling salesman. He spent all day driving from small towns to farms showing his samples and taking orders.

"At the small tourist cabins he rented there was no radio or television to pass the time, so he spent it studying the wide range of after-market accessories offered in the catalogs from filling stations, Western Auto Stores, J.C. Warshawski, and so on." The result is a classy "wish book" Nash with over 30 add-on extras.

The open area behind the seats of the Nash 600 was meant to house the supplies of a traveling salesman.

The 1948 Nash, like most early postwar cars, was simply a slightly warmed-over 1942. Smaller than the posh Ambassador, the 600 could travel 600 miles on one 20-gallon tank of fuel. It weighed about 400 pounds less than the equivalent Chevrolet, thanks to its innovative unit-body construction.

The hood ornament was an add-on not normally included in the stripped-down Nash 600.

Powered by a 172.6-cubic-inch L-head six delivering 82 horsepower at 3,800 rpm, the 600 featured a three-speed gearbox with electric overdrive. Nashes were among the best riding cars on the market, and the owner claims even this 112-inch-wheelbase plain-Jane model "rides better than our Lincoln Mark V."