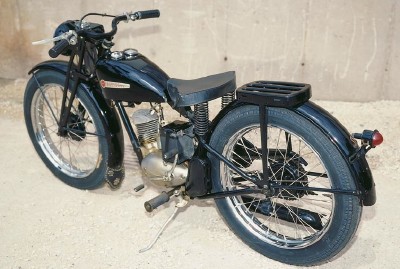 Despite its relative lack of power, the 1948 Harley- Davidson S-125 proved popular with the buying public. See more motorcycle pictures.

The 1948 Harley-Davidson S-125 motorcycle was Harley's offering to a postwar audience looking for inexpensive and reliable transportation.

At the close of World War II, thousands of G.I.s returned to the states hungry for wheeled mobility. Many had seen or spent time on Harley-Davidson's WLA military motorcycles overseas, and now craved one of their own.

With finances being tight for many, Harley decided to build a small, inexpensive machine for the masses. The result was the S-125.

With a single-cylinder two-stroke engine designed by DKW of Germany, this was not the kind of motorcycle most people associated with Harley-Davidson. Yet the company claimed 10,000 were sold in the first seven months of 1947.

Producing only three horsepower, the S-125 had a tough time reaching 55 miles per hour. Though a girder fork with coil spring was used up front, the rear had no suspension other than that provided by the sprung saddle.

But with a three-speed gearbox, foot shift, and hand clutch, the lightweight bike was simple and easy to operate. Many were "personalized" by adding the optional chrome wheel rims.

Several changes benefited the little Harley during its 13-year life span. Most notable was a switch to modern "Teleglide" telescopic forks in 1951, and a boost in engine size to 165 ccs in 1954.

The following year the bike became known as the Hummer, and it continued with only minor updates through 1959, after which it was dropped in favor of more contemporary designs.

More pictures of the 1948 Harley-Davidson S-125 motorcycle are on the next page. 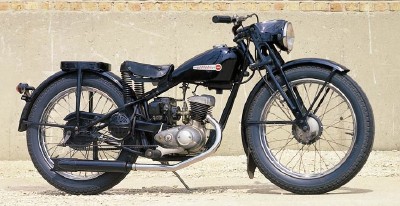 The modern hand clutch was a first for a civilian Harley, but fairly common in Europe at this time.
The Harley-davidson S-125's girder-style front fork was part of the original German DKW design.
The hand clutch/foot shift was a first for Harley- Davidson street bikes.
Harley's traditional horn was fitted to the S-125, though in a rather odd place near the rear wheel.