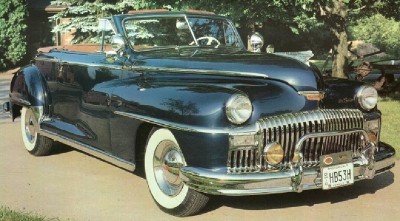 The design of this 1948 DeSoto convertible was based on 1942 pre-war models. See more classic car pictures.
©2007 Publications International, Ltd.

There's nothing new under the sun, it's often been said. Back in 1948, you couldn't have gotten much of an argument there from anyone who owned a freshly minted 1948 DeSoto Custom Convertible.

The car in his or her possession would have been a virtual clone of the 1946 and 1947 models, themselves based on the 1942 cars made in limited numbers before World War II armaments replaced them on Detroit's assembly lines.

To be fair, DeSoto was hardly alone in recycling its pre-war design. With the notable exceptions of Studebaker, Hudson, Packard, and a few select GM models, the major automakers held out until the 1949 model year before unveiling all-new designs.

But while other manufacturers went through the trouble of making at least token appearance changes to differentiate their 1946, 1947, and 1948 offerings, Chrysler Corporation was content to keep making essentially the same cars throughout at each of its divisions. (For example, the most discussed change to DeSotos came in late 1947 when 15X7.60 tires replaced 15x6.50 skins.)

In fact, production carried over into very early 1949, before completely new replacements could be introduced. In the early postwar years, Chrysler model years corresponded with the calendar, and the corporation didn't even bother to tally up individual model production until the "true" 1949 cars went on sale.

Not that anybody minded much. Americans grateful for a renewed flow of consumer goods snapped up anything on wheels to replace whatever had been serving them since before Pearl Harbor.

And DeSoto had gone a long way to spruce up the 1946. Fixed headlights replaced the hide-away units that had distinguished the 1942s. Front fenders now flowed into the front doors and the rear fenders were altered somewhat, too.

The postwar S-11 series was offered in DeLuxe and upmarket Custom trim, the latter home to a convertible coupe that had an inflation-fanned base price of $2,296 by 1948.

DeSoto turned out 8,100 of the S-11 convertibles, all with power tops and upholstery of leather and Bedford cord.

This restored ragtop has Fluid Drive, and accessory spot lights, wheel trim rings and whitewalls -- the last of which didn't return to the DeSoto options list until April 1947.