There was plenty of excitement for the 1949 Oldsmobile -- the year of "The New Thrill!" "Dashing in design, flashing in performance," shouted the ads, for the sensational new V-8 was ready at last.

Oldsmobile engineers reportedly wanted to call it the Kettering engine, but General Motors chairman Alfred P. Sloan, Jr., decreed that it could not be named for a living individual, so they called it the "Rocket." At first, the V-8 was employed exclusively in the 98 series.

Departing from the customary practice of the day, the Rocket engine -- designed by Gilbert Burrell, Oldsmobile's chief engineer, with an assist from "Pete" Estes, who would later go on to become president of General Motors -- was of over-square design. That is to say, the bore was greater than the stroke.

Thus, breathing was enhanced through the use of larger valves, while reduced piston travel led to decreased friction. "Slipper" pistons nestled between the crankshaft throws, hydraulic valve lifters were employed in the interest of quieter operation, and five main bearings promoted smoothness.

Experiments had been conducted using both L-head and overhead-valve configurations, and with eight-in-line as well as V-8 layouts. However, Oldsmobile engineers determined that the practical limit of the division's traditional flathead design was a compression ratio of about 8.0:1. Beyond that, they believed, the engine would be rough and noisy.

Looking toward the time when high-octane fuels would become available, Burrell and his staff were aiming for much higher ratios, hence the decision to go with the overhead-valve design. At the same time, a big-bore straight-eight was found to require an engine block that would be both unacceptably heavy and excessively long.

(Parenthetically, one is compelled to recall that by 1954 Packard was able to raise the compression ratio of its nine-main-bearing, L-head straight-eight as high as 8.7:1 without interfering with the silken smoothness for which that company's engines had long been noted. This implies no criticism of Oldsmobile engineering, but it does suggest that the Packard staff was doing some rather remarkable work.)

Oldsmobile's new engine plant came on line during September 1948, and production was soon proceeding full-bore (pun intended). The new Oldsmobile Futuramic 98 line was announced, along with the six-cylinder 76, on November 27,1948, and appeared in Oldsmobile showrooms during December, about a month behind the new Cadillac.

The coming of the Rocket engine meant an increase in displacement from 257.1 to 303.7 cubic inches, while the compression ratio edged up from 7.0:1 to 7.25:1. Oldsmobile engineers echoed Charles Kettering's declaration that as better fuels became available, ratios as high as 12.5:1 would be obtainable, and would provide "35 to 40 percent more mileage per gallon." They never did actually reach that figure, but by 1968 the ratio rose to as high as 10.75:1.

In the meantime, horsepower was increased from 115 in the old flathead straight-eight to 135 in the 1949 V-8, while torque was raised from 218 to 263 pounds/feet, an increase of more than 21 percent. At the same time, remarkably enough, fuel economy was substantially enhanced.

Oldsmobile hyped its new engine this way: "But the design of the 'Rocket' Engine itself is exclusively Oldsmobile's. And its many advanced features and high-compression advantages are available today. In all 8-cylinder Oldsmobiles for 1949, you will find an engine that is practically vibrationless. You will find a power plant that is so quiet that you don't even hear it from the driver's seat. You will experience no sensation of effort when the engine goes to work ... The car leaps into action as if it were 'air-borne' ... You feel as if you were propelled by some magic force, instead of by the engine under the hood. That's the 'New Thrill' of 'Rocket' Engine power."

Other improvements for 1949 included larger brakes and a new carburetor designed to minimize the problem of vapor lock. Hydra-Matic became standard equipment on all eight-cylinder models, and a downshift device, appropriately called "Whirlaway," contributed to blazing acceleration.

With an eye, perhaps, to competition from Buick's upstart Dynaflow, Olds noted that "Literally billions of miles of Hydra-Matic driving -- billions of miles of tested dependability -- represent concrete proof of Oldsmobile's nine years of experience in the automatic transmission field. ... Hydra-Matic's safety downshift, Whirlaway, is more thrilling than ever with the ... spectacular action of the new 'Rocket' eight-cylinder Engine."

There was another substantial price increase for 1949 -- $349 this time -- but half of that was accounted for by the now-standard Hydra-Matic.

During February, several months into the 1949 model year, General Motors introduced three highly styled "hardtop convertible" coupes, the first of their type to be offered on a regular production basis (Chrysler had made seven prototype Town & Country hardtops in 1947).

The Oldsmobile version, called Holiday, was exclusive to the 98 series that first year. Available in four special Holiday colors, as well as four two-tone combinations, it was priced the same as the convertible at $2,973, and like the rag-top it came equipped with hydraulically operated windows and seat.

Concurrent with the Holiday coupe's debut, the Buick and Cadillac Divisions introduced hardtops of their own. Buick's version, the first to bear the Riviera name, appeared on the Roadmaster chassis, while Cadillac's Coupe de Ville was an upscale member of its Sixty-Two series. Of the three, the Olds was by far the least expensive. The Buick sold for $3,203, the Cadillac for $3,496.

Reportedly, the original intent had been to use the new Rocket engine only in the 98 models. But Sherrod E. Skinner, Oldsmobile's canny general manager, conceived the idea of stuffing the V-8 into the smaller, A-bodied series, some 350 pounds lighter than the larger car.

Evidently, the General Motors high command accepted this radical notion with some reluctance, but a couple of months after the 98 and the 76 appeared, the fabulous "Rocket 88" was introduced. It promptly replaced the 98 as Oldsmobile's bestseller.

The 88 was chosen as the Pace Car for the 1949 Indianapolis 500 Memorial Day Race, and was soon setting stock car records all over the country. "Of the nine races staged by the NASCAR [National Association for Stock Car Auto Racing] Grand National division in 1949," according to Olds historian Dennis Casteele, "Oldsmobile took the checkered cloth in six of them."

It is reasonable to assume that the sensationally popular 88 may have stolen some sales from the larger and more profitable 98, for the latter's share of Oldsmobile's total slipped from 37.6 percent in 1948 to 34.4 percent in 1949. But in terms of raw numbers, the big Oldsmobile enjoyed its best year to date, with sales numbering 93,478 cars, a 43-percent increase over 1948.

It was a well-deserved success, for in the new 98 Oldsmobile offered a big, luxurious automobile, powered by an engine whose advanced design was rivaled only by that of the Cadillac. Accommodations were equal to Cadillac's, and styling was entirely contemporary. And yet this fine automobile could be purchased for as little as $2,426 with Hydra-Matic.

It is true, of course, that the Buick Super, even when equipped with optional Dynaflow, cost only $2,252. But Oldsmobile's Rocket engine produced 12.5 percent more horsepower and 24.1 percent more torque than Buick's aging straight-eight. Or to look at it another way, the Oldsmobile 98 cost $536 less than the cheapest Hydra-Matic-equipped Cadillac -- a difference of 18 percent, though the cars were comparable in many respects. And it was, just as the brochure boasted, "Dashing in design, flashing in performance...."

These were good times for Oldsmobile -- good times, in fact, for the entire industry. Yet, in a sense, hard luck continued to dog the division. Oldsmobile ranked seventh in production during 1949, turning out 29 percent fewer automobiles than fourth-place Buick. Not until 1958 would Oldsmobile sales surpass those of its principal intra-corporate rival.

To learn how Oldsmobile gained an advantage over Buick with the development of the C-body, continue on to the next page. 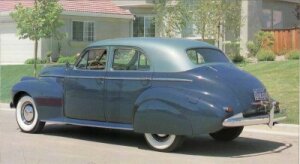