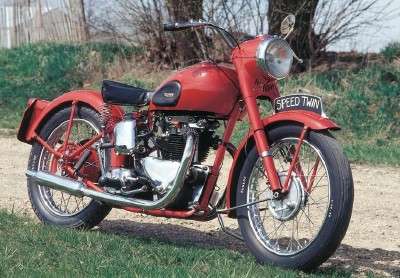 The 1947 Triumph Speed Twin motorcycle is a fine example of the kind of motor­cycle that made Triumphs so popular in the middle of the century.

Like so many other early makes, the Triumph nameplate was originally affixed to a line of bicycles that came out in the late 1800s. In 1902, the company began bolting small, Belgian-made Minerva engines into the frames, and the Triumph legacy was born.

Based in Coventry, England, Triumph offered nothing but single-cylinder motorcycles in its early years. Though a two-cylinder model had gotten as far as the experimentation stage in the early 1910s, the first of Triumph's famous vertical twins didn't go on sale until much later.

In 1936, Edward Turner joined Triumph as its chief designer and general manager. He quickly went to work developing a new, lightweight two-cylinder motorcycle, and within two years the company introduced a landmark machine: the Speed Twin.

First shown in late 1937 and sold as a 1938 model, the Speed Twin featured a 500-cc engine and four-speed transmission that were carried in separate cases -- a simple design that would be used in several Triumph models over the years.

Blessed with decent power and a light chassis, the Speed Twin was not only the mount of choice for numerous police departments throughout Europe, but was the template used to spawn a generation of English bikes.

Modern telescopic forks handled suspension chores in front fairly well, but the sprung saddle was the only rear suspension offered, as the Speed Twin rode a rigid frame.

In 1947 an optional sprung rear hub was offered, and our featured Speed Twin is so equipped. But it turned out to be a disappointment to those who ordered it, for the design allowed only minimal travel while adding a complex inner assembly of springs and related hardware.

Go to the next page to see more 1947 Triumph Speed Twin motorcycle pictures. 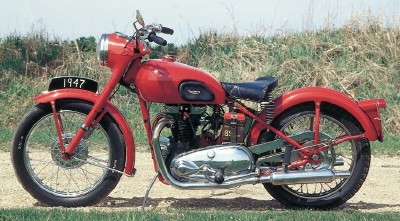 Although this model was not popular in its time, today "pre-unit" Triumphs are highly coveted in the collector market.

The 1947 Triumph Speed Twin descended from a line of lightweight two-cylinder motorcycles originally designed by Edward Turner in 1936. The 1947 model was unique because it offered a sprung rear hub, though riders found this only added problems with inner assembly and hardware.

The Speed Twin carried a speedometer, ammeter, and light switch in the headlight bezel.
By the mid-1960s, the Triumph's engine and in the 1947 model, they are still separate.
The sprung rear hub, first offered in the 1947 model, afforded only about one inch of wheel travel -- hardly a substitute for a good swingarm suspension.