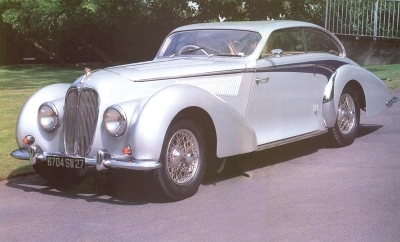 The 1947 Delahaye 135MS teardrop coupe is one the last models made by Delahaye. The company stopped production in 1954. See more classic car pictures.
©2007 Publications International, Ltd.

The 1947 Delahaye 135MS teardrop coupe is the triple-carburetor version of Delahaye's most famous model, the Type 135. The "S" means it has triple carburetors and 135 horsepower. Langenthal, a small Swiss coachbuilder with a good reputation, supplied a convertible body.

The original owner complained of noise and poor rear visibility, and returned the car to Langenthal for a removable hardtop. However, the top would have been too heavy for easy removal, so it was permanently attached.

Components were hard to come by in postwar Europe and it's speculated a military vehicle donated the heavy-duty wiring harness seen behind the engine.

The S in 135MS means the coupe has triple carburetors and 135 horsepower.
©2007 Publications International, Ltd.

The frog hood ornament was a common Delahaye accessory. The electromagnetic transmission has four speeds forward and reverse.

From 1895 to the mid-1930s, Delahaye was content building dependable, medium-priced cars and sturdy trucks. That changed in 1934 when the French firm introduced a chassis with independent front suspension and a 3.2-liter ohv six-cylinder engine.

To secure its entry into the grand-touring market, Delahaye sent a lightweight racer to the Montlhéry track near Paris and set 18 records.

Delahaye continued to be active in racing throughout the 1930s and won LeMans in 1938. For 1936, Delahaye enlarged the six to 3.5 liters to create its most-famous model, the Type 135.

Combining good handling and brakes, spirited performance, and the dependability of previous Delahayes, the chassis was a favorite of French coach-builders. The fact that it cost about half as much Bugatti Type 57 also helped.

When the Germans commandeered the factory during World War II, the management was quite adept at making sure Delahaye produced little to help the Nazi war machine.

A modified Type 135M resumed production in 1946, but trucks made most of Delahaye's money. Other car models were added, but there was little demand for luxury cars in the postwar French market.

Only 1,155 postwar 135s had been built by the time the model was dropped in 1952. In 1954, Delahaye merged with another French automaker, Hotchkiss. The new company ended Delahaye auto production.