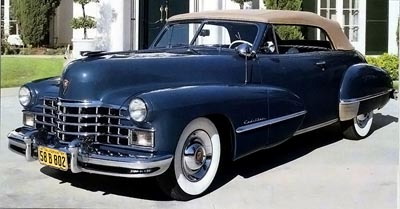 The Series 62 was Cadillac's most popular model in 1947. See more classic car pictures.

The 1947 Cadillac Series 62 Convertible was the company's most popular model after World War II, accounting for two-thirds of Cadillac production in 1947 -- of which 6,755 were convertible coupes.

As it sought to attain prewar production levels while struggling to meet the insatiable demand of the postwar seller's market, Cadillac was able to assemble 61,926 cars for the 1947 model year. Still, 96,000 orders remained unfilled.

The 1947 Cadillac used the same body shell as the 1941 model and displayed the same essential styling as the 1942, when bullet fenders debuted.

Styling changes to the 1947 Series 62 were minimal, though this model featured the optional "sombrero" wheel covers.

Styling changes on the 1947 Series 62 were limited to minor trim revisions. Stone guards, molded in rubber in 1946 due to postwar material shortages, came out in more attractive stainless steel. Block "Cadillac" lettering on the front fenders was changed to script. The area between the company's hallmark crest and the "V" adorning the prow of the distinguishing coffin-nosed hood was filled with a striped cloisonne. The crest on the decklid sprouted LaSalle-type wings.

The Cadillac AM radio was one of the most popular features in 1947.

Cadillac's trademark eggcrate grille was reduced from six to five horizontal bars for 1947, and redesigned, circular parking lamps were moved beneath the headlamps. Our featured example has optional fog lamps that share rectangular housings with the parking lights. It also sports the most noticeable and popular styling addition for 1947, optional "sombrero" full wheel covers.

The Hydra-Lectric automatic window lifts, standard on the Series 62 convertible and the formal 75 models, was the only significant functional change for 1947.

This particular car was originally purchased in California as a wedding present.

The Series 62 Convertible was the only open model that Cadillac offered in 1947. Owner Harry Nicks of Redlands, California, restored the featured Beldon Blue example, which has traveled only 26,000 miles. It employs the two most popular options: the Hydra-Matic automatic transmission, installed in 92 percent of all Cadillacs that year, and a Cadillac AM radio. It was originally purchased as a wedding present for some fortunate California couple.