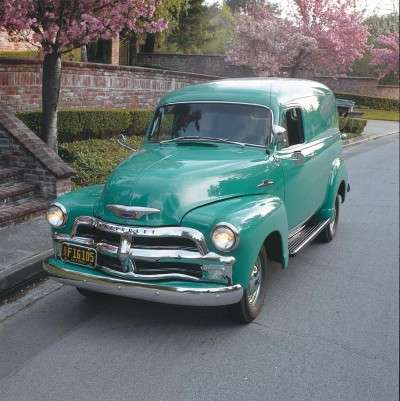 Early 1955 Chevy trucks were the last of the stalwart post-war designs.

The early 1955 Chevrolet trucks, generally called "First Series" '55s, were sold through March. At that point, they were replaced by completely re-engineered and restyled "Second Series" '55s, which promptly set a new standard for American trucks.

On the surface, the First Series trucks looked like a straight continuation of the 1954 models, but there were differences. For appearance sake, new hoodside series badges were applied, and grille bars adopted Bombay Ivory as the standard color. In the technical department, an open drive-shaft replaced the torque tube that had been a Chevrolet engineering staple. The early '55s also marked the end of the line for the canopy express; new shopping habits were ringing out the era of wares sold door-to-door from "peddler wagons."

Time had surely run out on the Advance-Design trucks by '55, considering Ford had totally redesigned its trucks for 1953 and Dodge had followed suit the following year. But these hardy Chevys were sales champs throughout their long run. Today, many of them still soldier on with grace and dignity, adding testimony to the durability and ruggedness -- the correctness -- of their design and engineering.