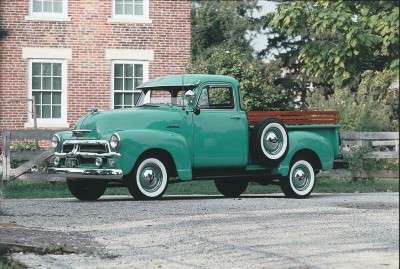 The 1954 Chevrolet pickup had a lower loading height and horizontal rails on the bed.

Although a complete makeover was in the works for the following year, the 1954 Chevrolet truck did get a facelift, including a switch to a one-piece curved windshield. Chief engineer Ed Cole also discontinued the 216.5-cubic-inch Thrift-Master Six and replaced it with the 235.5-cubic-inch engine from Chevy's larger Load-Master trucks.

According to designer Chuck Jordan, the 1954 facelift involved "choosing sketches off the wall, but we had [to continue] the front-end sheetmetal that Chevy gave us. We mounted [a complete production 1953 front end] on legs and tried different grilles. We had to use the same hood, same fenders. ... [O]ur job was to just fill the hole," he says. Designer Lu Stier's crew wound up with a single thick horizontal bar bisected by a stubby vee'd center bar, low rectangular parking lights, a new hood ornament, and hubcaps sporting Chevy "bow ties."

In addition to the visual revisions, Cole's group reduced the rear frame kickup to give the pickup bed a lower loading height. This allowed for pickup bed sides to be raised 2.25 inches on all models -- and three-quarter-ton pickups gained even more cargo capacity by a three-inch stretch of bed length to 90 inches. The new pickup boxes also now incorporated horizontal top rails. (This box design would go on to serve Chevy pickups into the Eighties.)

The truck engineering team beefed up the frame crossmember behind the engine, increased standard clutch diameter from 9.13 to 10 inches, and made four transmissions available: an all-synchro three-speed (standard in 3100s and 3600s); a four-speed all synchro gearbox with floorshift (standard in 3800s, optional in others); a heavy-duty all-synchro three-speed; and, for the first time, GM's four-speed Hydra-Matic automatic. The heavy-duty three-speed and Hydra-Matic could be ordered for any light-duty truck model. A 3.9:1 axle ratio was used in 3100s for greater fuel economy.

The 235.5-cubic-inch engine had been extensively tweaked for 1953, and was even more so for 1954. The head got a tighter 7.5:1 compression ratio, up from 7.1:1. Horsepower jumped to 112 at 3,700 rpm, torque was now 200 pound-feet at 2,000 rpm, and refinements included full-pressure lubrication, aluminum pistons, stronger connecting rods, a built-up crankshaft for greater stiffness, thicker bearing bulkheads for a beefier crank-case, bypass cooling, and improved distributor insulation.

A redesigned dashboard featured twin instru­ment dials that were slightly recessed, the speaker grille bars were now vertical instead of horizontal, and the upper portion of the dash bulged out slightly over the working section. Finger grips were added to the steering wheel. The seat was upholstered in brown leatherette, set off by beige trim and paint. Defroster openings extended fully beneath the one-piece windshield.