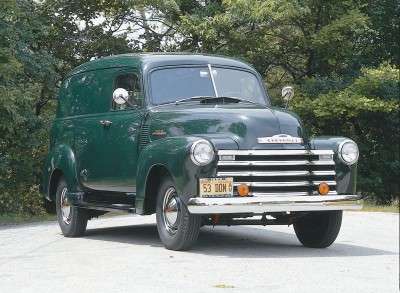 The minor differences that appeared in Chevrolet's 1953 truck line included new paint colors, restyled hoodside series designation plates (created by future design vice president Chuck Jordan, his first design element to reach production), slightly heavier front shock absorbers, modifications to the three-speed transmission to keep it from popping out of high gear, and a lower horn note. Hubcaps were now attached to the wheels by three wide clips instead of six narrow ones, and the parking-brake release handle was repositioned farther to the left to make disengagement easier.

New 1953 options included tinted glass and a sidemount spare-tire carrier between the cab and the left rear fender. The accessory oil filter was fed through a flex hose instead of metal tubing.

Ed Cole put on a relatively big push to improve Chevrolet's 1954 truck lines, but his main effort still centered on the V-8. He realized that the new engine would completely transform Chevrolet, both in its passenger cars and in its trucks. So the 1954 changes came in anticipation of an entirely upgraded range of 1955 trucks.