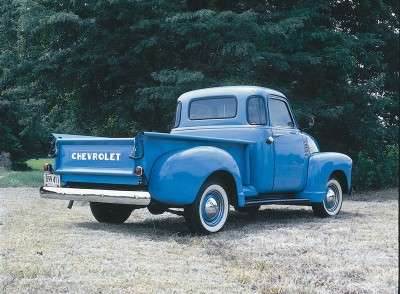 1950 would be the last year of the rear bumper on this generation of Chevy trucks.

The 1950 model year brought about the end of the postwar seller's market. Now, suddenly, America's insatiable appetite for anything on wheels came to an abrupt halt. Buyers were starting to pick and choose again (though they would make 1950 a record-setting year for car and truck purchases, spurred on to some degree by the start of war in Korea). Trucks had sold well during the previous four years, and Chevrolet had topped the market; total Chevy truck registrations had reached 345,519 by '49. But with buyers now in control, Detroit recognized that the sales race was about to heat up.

Even so, not much changed on 1950 Chev­rolet trucks. Horsepower and torque did increase by two on the Thrift-Master, to 92 horsepower at 3,400 rpm and 176 pound-feet at 1,000-2,000 rpm, thanks mainly to a revised Rochester carburetor and slightly bigger exhaust valves. Tubular rear shocks became standard, and the three-quarter-ton pickup now used eight-leaf front springs.

On panels and canopy expresses, a new single-sheet plywood load floor replaced multiple-board construction for better dust sealing. The Suburban resorted to single-tone standard paint and made available panel-style rear doors, marking the first time since 1946 that customers could choose between side-hinged doors or a top-and-bottom tailgate.

In 1949, Edward H. "Crankshaft" Kelley became Chevrolet's chief engineer. He continued to make minor improvements in the division's trucks, but he concentrated on his main areas of expertise, namely economy of manufacture and plant efficiency. Under Kelley's direction, Chevy's 1951 pickups lost some of their previous standard equipment, notably the rear bumper and spare-tire locks. But he did add conventional door-window ventipanes to replace the cowl vent on the driver's side.