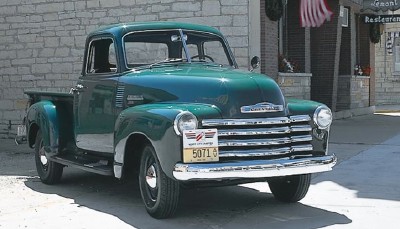 Apart from some functional changes to the 1949s, the 1948-1949 Chevrolet truck was similar to the 1947 model, and in fact Chevy's 1948 trucks were nearly identical to the '47s. To make more leg room for center passengers in 3100s and 3600s, the gearshift lever migrated from the floor to the steering column, and the parking brake was activated by a pedal operated by the driver's left foot, as on Buicks. At midyear, inside-door-handle action was reversed: You now pulled up to open the door.

A switch from poured to precision main bearings was made to increase engine durability, half-ton models got stouter front leaf springs, and the four-speed transmission was now fully synchronized. Otherwise, with Advance-Design trucks selling briskly, there was not much incentive for change.

Since the frame-mounted fuel tank interfered with certain body types on the 1947-1948 chassis, for 1949, Chevrolet moved it inside the cab on pickups and chassis/cabs. The new tank was long and thin, and stood upright behind the seat.

The cab itself, which had previously been attached to the frame at three points via shackle bolts and rubber mounts, was now mounted at four points. The idea of the three-point system was to let the frame flex without affecting the cab. This worked well, but the single forward mount put too much stress on the front frame crossmember, so two smaller shackle mounts were set on the forward chassis rails instead. The cab was still unaffected by frame flexing thanks to the lessened tension of the shackle bolts.

Frame flexing had caused other problems as well. There'd been complaints, for example, that the 1947-1948 radiator support in the 3100s tended to twist and shake loose after many miles on rough roads. This caused splits in the radiator core, and cracks in front-end sheetmetal. For 1949, Chevrolet added X-bracing to the radiator support frame, reinforced the bottom channel, and mounted the entire assembly more rigidly.

Hood shake had been another complaint, so a set of cross braces was installed. These ran diagonally across the inner front corners of the hood.

Under the hood, compression ratios went up by 0.1 point to 6.6:1 in the 216.5-cubic-inch Thrift-Master Six. To prevent stalling when the engine was cold, the carburetor received a fast-idle cam for the hand choke. The carburetor accelerator pump got moved down into the float bowl so the leather piston would stay wet.

The previous standard tool set was discontinued for 1949 (except for the jack and lug wrench), and more-durable Vinylite sparkplug nipples replaced the previous rubber ones. Engine-timing gears were now pressure lubricated, and the ignition switch was modified so it no longer had a keyless start position.

Door weatherstrips now slid into channels instead of being held onto the sheetmetal with screws. The 1949 taillamp was brighter, brakes got riveted rather than bonded linings, and wiring junctions now used tubular slip connectors instead of the bayonet type. New options included a combination fuel/vacuum pump for more consistent uphill windshield-wiper action. A nine-leaf rear spring was available optionally for heavier loads.

Cosmetically, the inner surfaces of all grille bars were painted white for 1949, and there were no more pinstripes across the outer bars. Also, series were identified by four-digit chrome numbers on both sides of the hood.