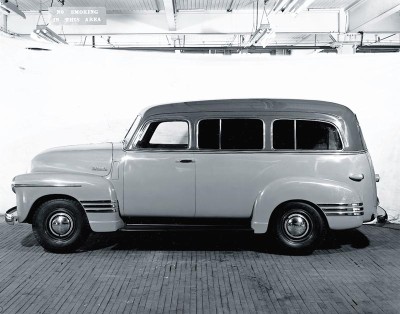 Suburbans, unlike the Chevy pickups, came in two-tone paint for 1947.

Chevy's trendsetting 1947 instrument panel placed two gauges in front of the driver, with a chrome speaker grille in the center. Hidden among its horizontal chrome bars, the driver could find a pop-out ashtray, as in 1939-1940 Cadillacs. It can be considered "trendsetting" because the 1947 truck dashboard seems to have set the tone for the 1951 Chevrolet passenger-car panel.

The wiper switch, choke, a pull-out throttle, and the ignition switch stood in a vertical line to the right of the gauge cluster. If a buyer ordered the optional Delco AM radio, the dealer installed it above the speaker grille. Ahead of the passenger was a capacious glovebox. Inner doors were exposed metal except for a small, rectangular, maroon leatherette trim panel screwed to the upper half. The headliner was cardboard, finished in the same slate gray as the instrument panel.

Given differences in wheelbase for each series, the steel cargo boxes on pickups stood 78, 87, and 108.13 inches long, and all were 50 inches wide by 161/4 inches deep. (The standardization of width and height meant half- and three-quarter-ton pickups gained bed space compared with earlier models, but one-tons lost cargo room.)

Floors were wood with steel skid strips. Tops of the box sides tilted outward at 45 degrees and also had a curled rim for extra strength, as did the bottom-hinged tailgate. The spare tire and fuel tank rested safely underneath the cargo bed. New bodies also lent more cargo space to panels, canopy expresses, and the Suburban.

The standard exterior color for most new Chevy trucks was Forester Green. This came with a cream pinstripe on the belt molding, across the painted grille bars, and encircling the chrome hub caps. Grille bars were body color, unless extra-cost chrome bars were ordered. Other no-cost factory body colors included a lighter green, red, white, black, orange, maroon, beige, and two shades of blue, all with contrasting pinstripes. Sub­urbans were the exception to the rule, coming in two-tone green paint (both shades of which being exclusive to the wagon) and with a chrome grille.

A Deluxe Cab package for pickups and chassis/cabs included the corner windows plus bright windshield and window garnish moldings, a seatback trim panel, driver's armrest, passenger-side sun visor, and chrome grille bars. Panel trucks could be outfitted with a similar decor option that did away with the seatback trim panel, but added chrome spears on the front and rear fenders.

Mechanically, the 1947 Advance-Design trucks remained pretty much as they'd been before World War II. The gusseted, ladder-type frame had slightly heavier and more-rigid side rails than before, and chassis dimensions increased slightly for 1947. The 3100 stood on a 116-inch wheelbase (versus 115 previously), the 3600 on a 125.25-inch frame (same as before), and the 3800 had a 137-inch wheelbase (up from 134.5 inches).

Chevrolet's tried-and-true pushrod "Thrift-Master Six" engine used a 3.50x3.75 bore and stroke, giving a displacement of 216.5 cubic inches. It had 6.5:1 compression, solid lifters, cast-iron pistons, a single downdraft Carter carburetor, and four main bearings. Lubri­cation was by a combination of splash and pressure. Horsepower came to 90 at 3,300 rpm, with 174 pound-feet of torque at 1,200-2,000 rpm.

The standard transmission was an all-synchro three-speed manual. Optional in 3100s and 3600s (and standard in 3800s) was a four-speed with a nonsynchro low gear. It had what was called a "granny low," meaning a stump-puller first gear. Top ratio in all three transmissions was 1:1, and all differential ratios were quite low: 4.11 in the half-ton, 4.57 in the three-quarter-ton, and 5.14:1 in the one-tonner. Considering that the pickups alone weighed from 3,345 to 3,845 pounds unloaded, performance was sluggish at best.

In keeping with these vehicles' overall simplicity, the clutch was a 9.13-inch-diameter single dry plate with dia­phragm springs on 3100 and 3600 trucks, 103/4 inches on 3800s. (The larger clutch was optional in the half- and three-quarter-ton series.) Gearshift and emergency brake levers rose from the center of the floor. Service brakes were specific to each series, with 159 square inches of lining area for the half-ton pickup, 178 for the three-quarter-ton, and 243 for the one-ton.

Base prices for factory-finished 1947 Advance-Design trucks ran from $1,087 for a 3100 pickup to $1,523 for a 3800 canopy express. Standard equipment included a reinforced black rubber floormat, dome lamp, rheostat-controlled instrument lighting, and twin vacuum-powered windshield wipers newly mounted at the base of the windshield. Items like oil and fuel filters, air cleaner, outside mirrors, hydraulic shock absorbers, longer running boards, chrome trim, heater/defroster, armrests, etc., were optional, some installed at the factory, others by dealers.

Because the American public was so starved for new vehicles after World War II, Chevrolet could easily sell as many cars and trucks as it could produce. For calendar year 1947, the division built 335,343 commercial vehicles of all sizes, a figure that included both the old 1946 style (which was made into May '47) and the new type, so it doesn't fully reveal the impact of the Advance-Design trucks. Chev­rolet probably wouldn't have had to update to sell as many trucks as it did, but the restyling certainly didn't hurt.