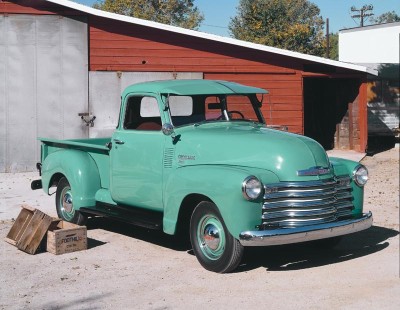 Chevrolet, America's top-selling truck brand in the Forties, was the first to get an all-new line of commercial vehicles on the market after World War II when it introduced its Advance-Design line in the summer of 1947. It's been a reliable favorite ever since that 1947 Chevrolet truck.

America's automakers stopped building cars during World War II, but they never stopped making trucks. Truck production continued at a strong pace throughout the war. From late 1939 through 1945, U.S. truck manufacturers turned out 3.2 million military transport vehicles, many of them quarter-ton jeeps, and pickups in half- and three-quarter-ton sizes. Chevrolet alone built more than 56,000 pickups between March 1942 and August 1945.

All General Motors-built pickups produced during the war years were basically 1941-1942 models. Those same designs continued with some upgrades after the war, but by mid 1947, Chevrolet and GMC introduced entirely restyled truck lines. These became the first rebodied General Motors vehicles produced after the war, and they arrived six months before any of the Big Three manufacturers -- GM, Ford, and Chrysler -- applied major styling changes to their postwar passenger cars.

Chevrolet's and GMC's so-called "Advance-Design" trucks entered production in May 1947 and officially went on sale on June 28, 1947. Contrast that date with GM's first restyled passenger cars, the 1948 Oldsmobile and Cadillac, which didn't reach dealerships until February and March of that year, respectively.

Which brings us to an intriguing question: Why this rush to restyle America's postwar trucks before its cars?

Taylor Vinson, of the Society of Automotive Historians, suggests that, because truck production did continue through the war, the body dies were probably well worn by VJ Day. Most had been used since before the war, and they'd most likely been patched and repaired many times. So, instead of continuing with the old dies, the manufacturers probably decided that it was cheaper and easier to design and create entirely new sets.

The 1947 Chevrolet pickup design had been in the works in Harley Earl's GM Styling Section since at least 1942. Harley J. Earl was GM's first vice president of design and the undisputed trend leader in American vehicle design. Precisely who was involved in the 1947 truck designs is uncertain. However, several clay models from 1943 showed the beginnings of the 1947 design: headlights integrated into the front fenders, tall hood, and split windshield. But these clays also had more sedanlike grilles and bumpers. Where the final production grille and interior came from also remains a mystery.

There was no identifiable truck studio within GM Styling during and just after World War II. GM's first dedicated truck and coach studio, under Luther W. Stier, came into being on November 21, 1949. However, Lu Stier had previously been a member of the Chevrolet passenger-car studio, so it's possible that he'd been one of the designers working on the new look for Chevy's 1947 trucks.

Fisher Body, the General Motors division that produced sheetmetal stampings for GM automobiles, had nothing to do with truck bodies. For the corporation's trucks and commercial vehicles, body engineering and production were done internally by the Chevrolet and GMC divisions. Chevy and GMC likewise de­signed and created their own body dies.

The light-duty Advance-Design trucks that are the focus of this article came in three series, all of them designated as "Thrift-Master" models. The 3100 series denoted half-ton trucks; three-quarter-tonners made up the 3600 series; and one-tons were in the 3800 range. (New Chevy trucks with 11/2- and two-ton capacity ratings were dubbed "Load-Master.") Common to all three light-duty lines were pickups -- the most popular of all truck styles -- as well as cab-and-chassis, cowl-and-chassis, and cowl/windshield-and-chassis versions intended for the mounting of specialized aftermarket bodies.

The 3100 and 3800 series also included fully enclosed panel and open-sided canopy express variants. The former featured twin side-hinged rear doors, while the latter, a descendent of one of the oldest light-truck styles around, sported a low rear tailgate and waterproof roll-up curtains on the back and sides. Another panel truck variation was the Carryall Sub­­urban, an all-steel eight-passenger sta­tion wagon restricted to the 3100 line. Stake-side and flatbed platform models were offered in the 3600 and 3800 ranges.

Cosmetically, GM's 1947 Advance-Design models looked unlike anything built to that time. "Round and juicy" is the way retired GM design vice president Charles M. "Chuck" Jordan describes them. GM's new trucks created quite a stir when they broke cover in mid 1947. Their overall shape and detailing were thoroughly modern at the time. They looked surprisingly simple, yet these trucks had a rugged elegance that was wholly without precedent. (The design has become so indelible that Chevy plays off of it for the retro SSR pickup, built in the 2004-2006 model years.)

On the practical side, the new cabs were larger, more comfortable, and more user-friendly than Chevrolet's previous models. According to truck authority Don Bunn, writing on the Website Pick-upTruck.com, Chevrolet queried fleet owners before establishing the dimen­sions and amenities for the Advance-Design trucks. Surveys showed that drivers wanted more interior space, a seat wide enough for three adults instead of two, better outward vision, and easier entry and exit.

Chevrolet's truck engineers, under the direction of John G. Wood, made the all-steel cab wider by having the bodysides overhang the frame siderails. This moved the doors outward several inches so that their outer surfaces came down almost parallel with the perimeter of the running boards. As a result, three adults could indeed sit side by side in the cab.

Ventilation was improved, too. Chev­rolet said it had "the cab that breathes," though the windshield no longer could be cranked open at the bottom. Fresh air was taken in through a louvered cowl vent on the passenger's side and a flip-open vent on the driver's side, as well as through a cowl-top vent. Air continually entered the cab through the right-side louvers (which also fed the optional heater/defroster when ordered) and was then ducted into the interior through slots behind the base of the windshield. Air circulated through the interior exiting via a long slot at the bottom of the rear window on cab models.

The driver could also open the cowl vent on his side, from which air entered through openings in the kick panel. To further improve sight lines, glass area was enlarged. Curved "Nu-Vue" windows could be ordered for the rear corners of cab models.

Much attention went into the bench seat design. The bottom cushion could easily be lifted up and out to give access to a toolbox under the floor. The seat it­self, upholstered in dark maroon leather­ette, could be adjusted for height and leg room by sliding it up and back on wedge-shaped floor runners. Moving the seat forward simultaneously angled it up­ward, automatically adjusting it to the driver's height so that a short person could see out just as easily as a tall one.

Cab models had a single bench seat. Suburbans used a short bench wide enough to accommodate the driver and middle passenger, plus a separate seat for the right-side passenger. This seat slid forward to allow access to the removable middle- and third-row benches. Panel and canopy models came standard with a single seat for the driver, but a matching passenger seat could be ordered.