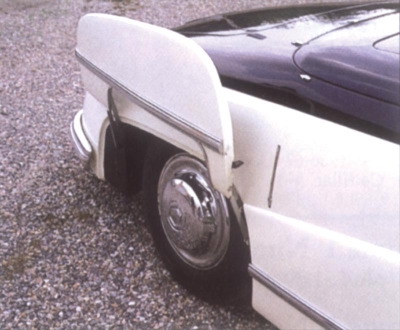 The 1947-1948 Isotta Fraschini 8C Monterosa was rife with devices to perform all sorts of tasks, including a mechanism to raise the hinged fender skirts. Onboard hydraulic jacks were located in all the wheelhouses.
David Durochik

A grandiose presentation catalog prepared for the Paris show contained a host of specialized cars in addition to the Isotta Fraschini 8C Monterosa that were meant to mesmerize potential buyers with the promise of a return to unique, handcrafted, and sensuously styled coach-built bodies. A long, black six-window-sedan was suggested as the car for driving in town.

A more streamlined pale green fastback sedan with hidden front wheels was advertised "for winter touring." While the beige-and-maroon, long-deck, four-window sedan "for rapid travel" brought to mind a zeppelin, the four-window sedan with rear suicide doors echoed a Hooper-bodied Rolls-Royce in its black and dark blue livery.

A convertible "for seaside holidays," available in cream and black, and equipped with an adjustable windshield, was similar to the original Boneschi convertible. So was another convertible available in dark green with a maroon top, said to be "for young sportsters." Isotta Fraschini also presented a five-window "business coupe" in two-tone gray and sporting orange wheels. But by far the most dazzling was the befinned, violet, streamlined, six-window car "for the autostrada."

A four-door convertible in light blue with a dark blue top "for summer touring" was seen in a more serious light, as was a light gray-and-black sedanca. Another more flamboyant four-door, three-position convertible in yellow and black was proposed "for the four seasons." And, naturally, an Italian red racing version featuring a tall rear fin could not be excluded from this catalog.

All of the sketches of these proposed automobiles were drawn by Rapi himself. The closed cars displayed his favored generous use of glass, often extremely rounded and forming a part of the roof. The designs were unparalleled at the time, but never got beyond the planning stage.

Rapi's intention was to take the Isotta Fraschini to the United States, conquer the upper end of the lucrative American automobile market, and thus secure the marque's future. But his obsession with perfection and luxury (he often demanded that even the slightest blemishes be completely reworked in order to obtain a flawless car body) indicated his apparent misapprehension of the times.

Indicative of his delusion was that the going price of the Touring-bodied two-door sedan was about $10,000; the most expensive chauffeur-driven limousines offered by Cadillac and Packard in 1947 cost slightly less than half that. A leap across the Atlantic remained a pipe dream.

There was no relief to be found "at home" either. Europe had been destroyed. Italy was in a state of destitution. In France, the wealthy were eager to buy luxury automobiles, but the government imposed such an excessive luxury tax -- even beyond that in Italy -- that entering the market was futile. In the years following the war, there was, of course, a fundamental shortage of passenger cars in Europe. What Europeans required were utility vehicles and small, economical cars.

Isotta Fraschini was part of the Caproni group, which, faced with limited opportunities to sell aircraft in a virtually demilitarized Italy, attempted to turn to the manufacture of vehicles and industrial products under the CEMSA-Caproni Holding banner. It was hoped that in this way, Isotta Fraschini could be resurrected.

A new management employed engineer Alessandro Baj to oversee potential export opportunities, but innovative modification proposals, which included a 12-cylinder engine and automatic transmission, were shot down. The sheer multitude of differing opinions regarding the rebuilding of Italian industry brought activity to a halt. The influential Communist Party and trade union organizations were opposed to the extravagance of luxury-car production.

In addition, the government flatly refused to provide the necessary subsidies. Meanwhile, the company itself had invested precious resources in the development of the CEMSA-Caproni Tipo F11, a proposed mass-market car with a modern, four-cylinder flat engine and front-wheel drive. The Monterosa and F11 were exhibited together for the last time at the Geneva Motor Show in March 1949. Isotta Fraschini went into liquidation in September 1949 and CEMSA-Caproni dissolved as a company shortly thereafter.

Half a century later, it is not possible to ascertain just how many Isotta Fraschini Tipo 8C Monterosas were actually built. There may have been as few as three and likely no more than six.

The attempt to resurrect a model of automotive excellence was a definitive failure. It was only due to repeated restructuring of the holding company that Isotta Fraschini was able to maintain its Italian plants and preserve a pair of prototypes to this day.