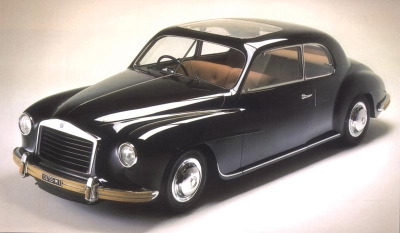 The Mazzotti group's management having given up as well, in 1935, Isotta Fraschini was purchased by Caproni, a leading aircraft manufacturer. The systematic manufacture of engines for ships and planes, Isotta Fraschini's most recent specialization, ran full speed ahead. The plants, in which luxury cars were once assembled by hand, were used for the mass production of trucks built under license from M.A.N. of Germany.

At the same time, in a little studio at the plant's original site, special plans were being drawn up that had no resemblance to weaponry. A group of outstanding designers, inspired by imagination and solidarity, had not lost their unshakable optimism.

Giuseppe Merosi, director of truck manufacturing, and Fabio Rapi, a young and very talented engineer, began designing a six-cylinder sedan with a modern 3.0-liter ohv engine expected to perpetuate the glorious tradition of the Isotta Fraschini, but which would move within a completely different price range. This work, however, was abruptly halted by the Fascists' "men in black."

Did this mark the end of a dream? No. Rapi's diligence was limitless. As early as 1938, he secretly gathered a small team of colleagues to develop yet another, even more sensational new Isotta Fraschini. In cooperation with Aurelio Lampredi, who in years to come would create wonderful designs for Ferrari and Fiat, Rapi strove to realize his unique technical vision. However, the outbreak of World War II shattered their initial optimism.

While the battlefields claimed their terrible tributes, the men working in the Isotta Fraschini factory struggled to stay abreast of technical progress despite their ongoing shift work. Rapi's later car construction would profit from the experience gained through the manufacture of airplane engines. He had set high standards for this automobile, whose ongoing secret design meant that it was ready for production immediately following the war.

The first drafts, which were based on conventional automotive technology, were completed in 1938 and eventually included a more advanced version of the last Tipo 8B of 1934. Over the years, however, he discarded all traditional design details.

Limited as he was to Axis-controlled countries, Rapi still hoped to exchange know-how with experts. He went to Czechoslovakia, which had been occupied by Nazi Germany. There, he was impressed by the bold design of the Tatra automobile. These streamlined cars with air-cooled eight-cylinder rear engines pointed the way ahead.