by the Auto Editors of Consumer Guide
NEXT PAGE
Image Gallery: Classic Cars 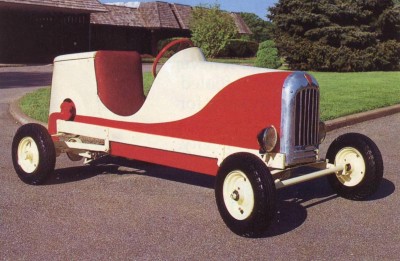 The 1946 King Midget was a single-seater, styled like a quarter midget race car, with scooped door openings but no doors or top. See more pictures of classic cars.

The 1946-1970 King Midget was a minimalist car if ever there was one: tiny, ultra-light, and powered by a one-cylinder engine. Though it never sold in large numbers, it fooled most everyone by surviving for two dozen years. There were good reasons for that longevity.

They stared out at you from the back pages of those "Do-It Yourself" magazines, a tiny ad the size of a postage stamp, a grainy black-and-white picture of a minuscule car and an all-inclusive boast: "World's Most Exciting Lowest Priced Car."

The founders of the enterprise were tinkerers, handymen, dreamers, and doers able to shape in metal what most men can barely shape in the mind. The buyers were hardy and individualistic, Like the cars themselves, and gloried in the economical operation and eccentricity of their vehicles. Not just any midget automobile, this one proclaimed itself "King Midget."

King Midget was one of the flood of new and offbeat cars introduced in the post World War II era, a roll of the dice by people who weren't part of the entrenched auto industry. Some were the dreams of men back from the greatest war in history, men who held an old-fashioned belief that in America a man could accomplish anything he set his mind to, that no mountain was too high and no door was closed to him.

Many tried to find success: Playboy, Keller, Tucker, and Davis -- to name a few. Of all the cars introduced by these so-named "Lesser Independents," the King Midget lasted the longest. Why? Perhaps it was the men behind the car that made this enterprise so different from the others.

Dale Orcutt, from Columbia City, Indiana, and Claude Dry, from Pryor, Oklahoma, were men who seemed predestined to be friends. They met during the war years, when they served as Civil Air Patrol pilots. They seem to have had similar boyhood interests. Both were interested in flying. Both, amazingly, had built their own backyard airplanes. Both were imbued with mechanical ability and a fondness for tinkering. Both shared dreams of manufacturing a vehicle of their own design after the war.

The early postwar era was a healthy environment for such dreams, with war surplus machine tools selling at bargain prices. Dry and Orcutt got together in Athens, Ohio, where they leased an old two-story grocery store for their manufacturing venture and bought the needed machine tools. They started out on a shoestring, manufacturing small motor-scooters during the evenings, while holding down regular jobs by day. Midget Motors Supply was the original company name, but that was later changed to the more apt Midget Motors Manufacturing Company.