The 1946, 1947, and 1948 Chevrolet Stylemaster, Fleetmaster, and Fleetline were warmed-over versions of 1942 cars, but that hardly mattered to a car-hungry public.

After nearly four war years in which no civilian passenger cars had been produced, Detroit could have sold anything with wheels that went round and round. Chevrolet, along with most of its competitors, shrewdly elected to serve up existing models. After all, the paid-for factory tooling was already in place, and the demand for new cars was unprecedented.

The 1946 Chevrolets began to roll off assembly lines on October 3, 1945, in minuscule numbers at first. There was a shortage of critical materials, notably sheet steel. Production had not yet resumed its normal pace when a United Auto Works strike was called on November 21. Assembly lines ground to a halt. Not until March 13, 1946, was the strike settled. Sixteen days later, Chevrolet became the first GM division to resume production.

There were new model names for 1946. The Master DeLuxe had become the Stylemaster, while the Special DeLuxe was renamed the Fleetmaster. The Fleetline continued as a Fleetmaster subseries. Body types were the same as before, except that there was no business coupe in the Fleetmaster series.

Apart from a new grille, the 1946 Chevrolet was virtually identical in appearance to the final prewar series, and there were no significant mechanical distinctions.

Grille and beltline moldings were further changed for 1947, by which time the Fleetline Aerosedan was once again Chevy's volume leader, taking over from the 1946 Stylemaster Sport Sedan.

Minor modifications in trim were made for 1948, but sustained demand made substantial changes unnecessary. Not until the 1949 models appeared, in January of that year, would there be a "true" postwar Chevrolet. 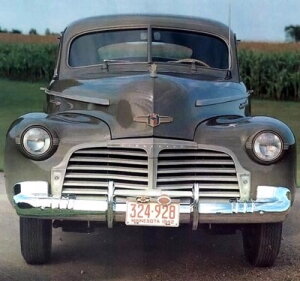 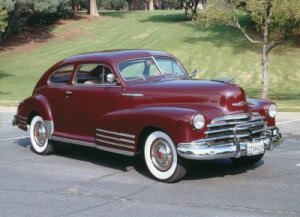