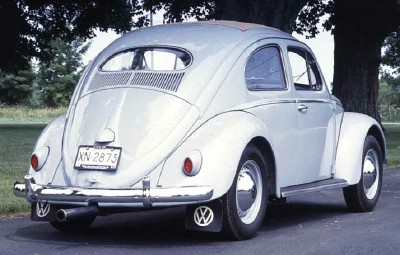 The Beetle lost its split rear window for 1953 in favor of a one-piece oval unit, as shown on this 1956 Volkswagen Beetle sedan.
2007 Publications International, Ltd

The 1955-1959 Volkswagen Beetle models well and truly established the little air-cooled, rear-engine car as part of the American landscape. America was becoming the Bug's home away from home, and in 1955, Volkswagen United States (later Volkswagen of America) opened its doors in a modest two-story building in Englewood Cliffs, New Jersey.

"There is no longer any doubt about it," said Road & Track in October 1956. "Dr. Ferdinand Porsche's little 'people's car' has done what no other [import] has ever been able to do: it has gained an unmistakable wheel-hold in the garages and hearts of the American car-buying public . . . . The only mystery is: how did it happen? Especially with practically no national advertising? Of the various explanations, probably the simplest is that the Volkswagen fulfills a need which Detroit had forgotten . . . a car that is cheap to buy and run, small and compact, light and maneuverable yet solidly constructed, and perhaps above all, utterly dependable and trouble-free."

How true. Against the increasingly bloated, overdecorated gas-guzzling fantasies of mid-1950s America, the thrifty, practical Volkswagen Beetle was a paragon of common sense -- almost an "anti-car."

It certainly wasn't snazzy or even very roomy, it wasn't fast (0-60 mph took over 20 seconds and top speed was just 68 mph), and backing off the gas in mid-corner could send you sliding off tail-first. But the Beetle was fun to drive, a breeze to park, had no trouble keeping up with traffic, and, thanks to constant improvement, was finished like a Rolls-Royce and wore like iron. No wonder so many Americans loved it.

In all, the Volkswagen Beetle took Volkswagenwerk a very long way in a rather short time. By 1960 the company had added plants in Hanover and Kassel, and was shipping Beetles as complete-knock-down (CKD) kits for assembly in countries like South Africa (starting in 1951), Australia (1954), and Brazil (1959).

The car Hitler had conceived for the German people had become a car for the people of the entire free world. The pride of Wolfsburg had progressed far indeed.