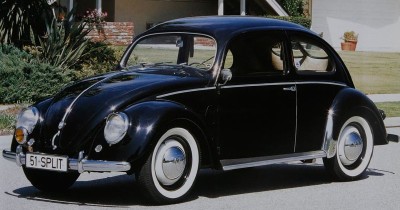 The 1950-1954 Volkswagen Beetle rolled out refinements at a regular place, but established the notion that advancements would take place with very little change to exterior styling.

By 1950, the Volkswagen complex included four mile-long assembly halls, several other large buildings, a rail siding, test track, and even a power station. With that, Volkswagenwerk was West Germany's largest single employer, and thus the engine for a national economic recovery few would have thought possible.

By that time, general manager Heinrich "Heinz" Nordhoff had broadened Volkswagen's reach with two cleverly conceived spinoff models: the Transporter or Microbus, the original "minivan," introduced in 1950; and the Karmann-Ghia of 1955, a Beetle in Italian sports togs crafted by the Karmann coachworks of Osnabruck.

But it was always the winsome Volkswagen Beetle that brought in the vast majority of sales and profits, which kept improving each year right along with the car. And how it improved! The 1950 Volkswagen Beetle adopted hydraulic brakes (export) and an engine heat-riser; a sunroof sedan was added; and a thermostatic throttle ring was adopted for automatic air cooling.

New for the 1951 Volkswagen Beetle were the Wolfsburg crest on the trunklid as well as vent flaps in the front fenders. The flaps would be replaced with vent windows on the 1952 Volkswagen Beetle.

That year also saw the 5.60 x 15 tires replaced with 5.00 x 16s and synchromesh on all gears but the first. The dash was redesigned with a glovebox door, ashtray, central radio grille, and speedometer ahead of the driver. There were now two brake/taillamps (vs. one stoplamp).

The yearly changes were only the beginning. The same could be said for Volkswagen's continued corporate growth. By 1956 the company had passed one million in total production and was doing business in 80 countries.

That included the U.S., where Dutch Volkswagen importer Ben Pon had first tried selling the Beetle in 1949. He managed only two. Next came Max Hoffman, America's import-car baron, who teamed with Arthur Stanton and John von Neumann to sell Volkswagens through East and West regions.