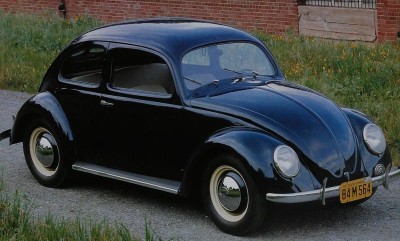 The 1949 Volkswagen Beetle came in Standard and fancier DeLuxe models. This is the Standard version, which lacked some of the DeLuxe's chrome trim.
2007 Publications International, Ltd

The economics of small-car production on a large scale began to fall into place with the 1948-1949 Volkswagen Beetle.

In June 1948 the Allies restored West Germany to a free-market economy based on a new deutsche mark, and gave every citizen DM40 -- about $10. Meanwhile, Ivan Hirst decided to call in a motor-industry professional, and he struck gold in Heinrich "Heinz" Nordhoff, a former executive at General Motors' Opel subsidiary.

Though no less impoverished than the people of Wolfsburg, Nordhoff worked tirelessly to secure their future as general manager of the newly formed Volkswagenwerk GmbH, starting in 1948. One of his first acts was to reestablish ties with the Porsche Bureau through Ferdinand Porsche's son Ferry.

This produced an agreement giving Porsche a royalty of DM5 (about $1.25) on each Volkswagen built; in return, Porsche promised not to compete with its own small car.

Nordhoff then mapped a bold long-term plan: Volkswagen would concentrate on the Beetle, improving it where needed but never for the sake of mere change. The firm would also emphasize customer service and export sales, particularly in the United States.

To that end, Volkswagen established a chain of service centers in Europe, offered auto insurance through dealers, and touted the low cost and high reliability of its products with snappy, often humorous advertising.

Efficient use of space: The 1949 Volkswagen Beetle housed a toolkit in the wheel center of its spare tire. The spare was in the front luggage compartment
2007 Publications International, Ltd

The first Volkswagen Beetles finally arrived in the United States in 1949, the initial shipments being orchestrated by Dutch importer Ben Pon.

Volkswagen offered both Standard and DeLuxe versions for the model year. Spartan accommodations greeted buyers of the 1949 Volkswagen Beetle Standard sedan. Dashboards were done in a monotone scheme, with black Bakelite being used for knobs and the speedometer surround. Some relief was provided by contrasting seat and door-panel materials, but the Standard Volkswagen Beetle left no doubt about its utilitarian mission.

Foot pedals sprouted from the floor rather than hanging down from beneath the dash as they did in most cars. To the right of the speedometer was a panel that could be removed if the optional radio was ordered. New was a Solex carburetor, double-action shock absorbers, and the Volkswagen logo imprinted on the hubcaps.

The 1949 DeLuxe Volkswagen (export) sedan had better trim, equipment, and sound-deadening. Convertibles were also added in 1949 (mostly Karmann-built four-seaters, but also 750 two-seaters by the Karosserie Hebmuller).

Nordhoff had a simple plan for a simple car, and he made sure that both worked to perfection. That they did. People fell in love with the Volkswagen Beetle and orders poured in, prompting vast expansion in facilities and workers.