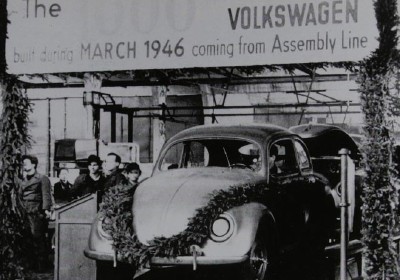 Volkswagen held a celebration when its Wolfsburg factory managed its first 1,000-unit month in 1946. Shown here is a 1946 Volkswagen Beetle.
2007 Publications International, Ltd

The future seemed bleak for the 1945-1947 Volkswagen Beetle. As it crawled out from the rubble of World War II, the Beetle seemed headed for an early death, not lasting greatness.

Indeed, the car was defined more by its vices than virtues. Volkswagen Beetles that crawled forth from the Wolfsburg factory in 1946 were decidedly spartan conveyances: outmoded cable brakes and non-synchronized transmission, a measly 25 horsepower, waywardness in gusty crosswinds, little luggage space, a crude heater, not even a fuel gauge (drivers just ran the engine dry, then tapped a one-gallon reserve).

Gauges were limited to a just a speedometer and warning lights, and the glovebox doors that graced earlier models were apparently deemed superfluous and left off. Semaphores extended from the center roof pillars at the twist of a dashboard knob (located above and to the right of the speedom­eter) to signal turns.

Exteriors were completely devoid of chrome trim, a directive that would soon have to change in order to maintain marketability, but the styling would otherwise remain remarkably constant for the next three decades.

Yet the Volkswagen Beetle became the most successful car of all time (a title it eventually lost to Toyota's Corolla) while leading postwar West Germany to unheard-of prosperity. How? Because despite its undeniable faults, the Beetle charmed most everyone who touched it -- starting with Ivan Hirst and his British Army cohorts, in all likelihood the first non-Germans afflicted with "Beetlemania."

And why not? The Beetle's air-cooled engine couldn't freeze up or overheat, and it was in the rear, giving traction to conquer icy hills and sandy bogs that defeated other cars. Though the ride was choppy, the all-independent suspension stood up to the pounding of war-ravaged European roads, and wide-ratio gears combined with an engine that was deliberately understressed to allow flat-out running all day -- and on the worst fuel. The Beetle was also engineered for tight assembly and easy repair.

VW built nearly 8,000 1946 Volkswagen Beetles, though they were not yet for sale to civilians. Note the absence of chrome trim on this 1946 Beetle.
2007 Publications International, Ltd

And then, of course, there was the sheer cuteness of the thing. Even in 1945, a Beetle looked, sounded and drove like no other car. With its functional simplicity and let's-go friskiness, it was nothing so much as a four-wheeled Fido -- and who could resist that?

Certainly not Major Hirst and his chums, who continued to help rebuild Wolfsburg and the Volkswagen plant during the early postwar years. Thanks to their efforts, Volkswagen managed nearly 8,000 vehicles in 1946, including its last military models.

The first true civilian Beetles -- almost 9,000 -- chugged forth in 1947. These were not only the first Volkswagens sold to civilians, they were also the first to sport chrome trim, including bumpers, hubcaps, and running-board moldings. The understressed 1131-cc engine put out a meager 25 horsepower, yet could tirelessly hold the car at its 60-mph top speed all day long. Production for 1948 was 19,244, amazing given the still-difficult conditions.

But who would buy all those cars? Demand among Allied occupation forces was satisfied, and most Germans still couldn't afford even a motorbike. That left exports, but prospects seemed dim for a relic of the hated Third Reich. Besides, there was no company to handle sales, service, or anything else.

Then too, Hirst's superiors weren't nearly so enthusiastic about Volkswagen. Though Hirst had shown the factory was still viable, a British commission concluded that the Beetle itself would be "quite unattractive to the average motor-car buyer. It is too ugly and too noisy . . . To build the car commercially would be a completely uneconomic enterprise . . . . "

Finally on sale to the public, the 1947 Volkswagen Beetle sported chrome trim and available two-tone paint. The 1947 Beetle had 25 horsepower.
2007 Publications International, Ltd