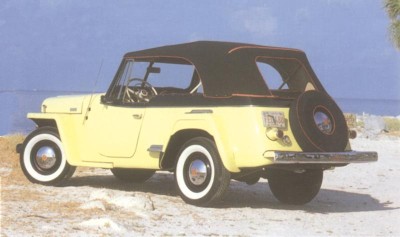 The 1948 Jeepster attempted to add some sportiness to the Jeep lineup.
©Mike Mueller

Designed by Brooks Stevens, the Jeepster first appeared on April 3, 1948. The name had been coined more than five years earlier by Joe Frazer, then president of Willys-Overland. The Jeepster represented an effort to broaden the Willys product line, tapping into a market that was more youth-oriented than that of the Station Wagon, more urbane than that of the Jeep Universal.

The phaeton was developed at remarkably little cost to its builders. The driveline came right off the Willys parts shelf: the familiar "Go-Devil" four-cylinder engine; clutch, transmission, overdrive, differential, suspension, steering, and brakes were all from the Jeep Station Wagon, though the wagon's frame was stiffened for this application by the addition of an X-member.

Thus, tooling costs were minimal, as far as the chassis was concerned. With a 500-pound weight advantage, the Jeepster could be expected to perform in much more sprightly fashion than the wagon -- though it obviously wasn't going to blow anybody's doors off.

Development of the body was almost equally economical. The front end of the Station Wagon was borrowed, almost in its entirety. Rear fenders came from the Jeep truck. There was no fixed glass apart from the windshield and vent wings.

There were just two doors. (The first prototype, in fact, had no doors at all.) A canvas top and side curtains provided protection from the elements. Body stampings were simple, requiring very little draw. All in all, the capital investment was almost negligible.

Remarkably little fanfare accompanied the Jeepster's introduction. A product as unique as this one might have been expected to reap a publicity bonanza for Willys-Overland, but for reasons that remain obscure the company let that opportunity go.

There was, however, at least one very effective magazine advertisement. In its colorful prose -- and even in its use of ellipses -- the ad recalled the work, in an earlier generation, of the legendary Ned Jordan:

"Wherever there's fun, there you will find the people this car was made for . . . people with a flair for the unusual; who combine smartness, unerring good taste and a sharp sense of value."

Not as many people found the Jeepster as appealing as Willys-Overland had hoped. For a car with sporting pretensions, the Jeepster's performance left something to be desired.

A new, slightly vee'd grille with five bright horizontal bars was featured for 1950, and later that year performance was further enhanced when the six-cylinder engine was bored to 161 cid, raising the horsepower from 70 to 75.

But sales of the Jeepster, somewhat disappointing from the outset, faltered badly in 1949 and made only a partial recovery the following year. Jeepsters were catalogued for the 1951 model year, but these were actually leftover 1950 cars. Production of the little phaeton had already been halted; only 19,132 had been built over a period of less than three years.

Perhaps the Jeepster was a concept whose time had not yet come. In recent times, the car has become a much sought-after collector's item and is the only Willys to have been designated a Milestone car. So of course the question remains: Why was it not more successful in its own time? Several reasons:

During this time, Willys had been enjoying a period of considerable prosperity. Business Week reported that production for 1948 came to 138,000 units, compared to a wartime top of 107,000 during 1944.However, the company's cash reserves were slim. At the time the United States entered the war in December 1941, Willys-Overland's working capital had amounted to less than $2 million. And even at war's end, only $20 million had been available for retooling and expansion.Then as the Korean War turned the postwar economic boom to bust, Willys was in no position to endure harsh economic times. Yet, with several highly saleable models, a good export market, and a sound dealer network, they were a highly attractive proposition for a larger corporation. Read on to find out what became of Willys' Americar.For more information on Jeeps, see: