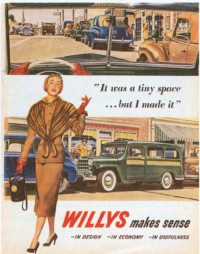 The first of the postwar Willys trucks was the half-ton panel delivery, introduced in 1946. Built on the 104-inch, 2 x 2 chassis of the Jeep Station Wagon, it used the wagon's body stamping. Power came from the same "Go-Devil" four-cylinder engine that had given such distinguished service during the war.

For 1947, a series of one-ton, 4 x 4 trucks was added. Available in pickup, platform stake, chassis and cab, or bare chassis form, these trucks used a 118-inch wheelbase and weighed as much as 3,431 pounds.

In 1950 the trucks were restyled, again along the lines of the wagon. A pointed grille with five horizontal trim bars gave the Jeep trucks just a suggestion of style. The following year the 72-horsepower, F-head "Hurricane" engine took the place of the previous 63-horsepower flathead.

Truck production for 1951 came to 22,282 units, well over a quarter of Willys-Overland's total output. Available accessories included a power takeoff, pulley drive, and a speed governor for the engine.

These trucks were not particularly cheap. The 4 x 2 pickup, for example, cost $73 more than a 3/4-ton Chevrolet. But the Jeep trucks had a lot going for them, not the least of which was their reputation for toughness. And there literally was no competition in those days for the four-wheel-drive models.

Willys began to move its trucks upscale, and by 1952 the panel had become known by the more prestigious name of Sedan Delivery. Some dress-up items, such as chromed front and rear bumpers, chromed wheel discs, and even white sidewall tires, had joined the options list.

In 1948, with the wagons, Universals, and trucks selling well, Willys hoped to capture another section of the market. This market niche was created by American GIs returning home from Europe, where they had come to love little English sports cars.

The MG TA and TB (built from 1936 to 1939) were just this type of car, and when the GIs returned home they found that no American manufacturer was building a car like the MG. In fact, many soldiers who had purchased MGs during and after the war brought them home with them.

Willys hoped to play on this popularity by producing another vehicle with the flavor of a Jeep and an MG. This vehicle would be a cross between a Jeep and a sports car, and it would be called the Jeepster.

True, it wasn't a genuine sports car. No American firm of any consequence was building sports cars in those days. But it was an open car -- the first American phaeton in a decade -- and it certainly had a sporty flair. Better yet, its squared-off styling was distinctly reminiscent of the Jeep. Move on to the next page to get more information on the Jeepster.