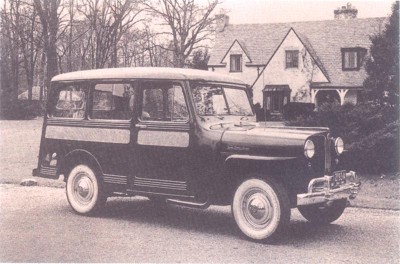 Popular Science magazine announced in the August 1943 issue, "Cash Prizes for your ideas on Peacetime Jobs for Jeeps." The money involved was almost ludicrous, even by the standards of the time. First prize was $100; second, $50; third, $25; and five prizes of $5 each.

Even so, there were nearly 1200 entries. "So numerous and so meritorious were the ideas submitted," declared the editors, "that Popular Science increased the number of prizes from eight to 11 and included 11 honorable mentions."

Based on the replies they received, the editors concluded that "the jeep's reward for its part in winning the war is likely to be, for the most part, a lifetime of work down on the farm."

More than a third of the respondents, including the winner of the $100 First Prize, "thought the proper postwar place for the jeep was on the farm, where its chores would take in about everything now performed by man, beast, or machine."

Winner of the top award was R. W. Radelet, of Vancouver, British Columbia, who submitted an elaborate drawing of jeeps per forming a variety of tasks in a rural setting: pulling implements such as the mower, rake, harrow, or plow; serving as a stationary power source; acting as a light delivery vehicle or as personnel transport; and even serving as the base for an extension platform from which trees might be sprayed.

State agricultural departments and colleges and universities from coast to coast showed a keen interest in the peacetime possibilities of the versatile little machine. Washington State University even published a 20-page monograph describing various farm uses for the military version.

Other experiments took place in a variety of forest, farm, government, and industrial settings. Again, it was a cost free publicity bonanza for Willys-Overland as the company prepared for the conversion to a peacetime economy.

Hitler's suicide on April 30, 1945, was followed on May 2 by the surrender of Germany. Now the full force of the Allied war effort could be turned against Japan. Although few people were then aware of the existence of the atomic bomb (and even those few probably failed to fully appreciate its enormous destructive potential), it was obvious that the end of the war was within sight.

On July 31 the government contract with Ford ended, and the jeep reverted exclusively to Willys-Overland. Thirteen days earlier the company had dramatically announced its first peacetime model, the CJ-2A.

A demonstration was held that day, for the benefit of the press. Charles Sorensen, vice chairman by then of the Willys-Overland board of directors, hosted the event at his New Hudson, Michigan, research farm.

The CJ-2A was easy enough to distinguish from the MB. Headlights were seven inches in diameter, instead of six. There was a tailgate at the rear, and the spare tire was moved to the right side. An automatic windshield wiper replaced the hand-operated number on the passenger's side. There was even a remote gas filler. (On the military model, the tank was located-like that of the Model T Ford-under the seat; and the driver was forced to debark in order to take on fuel.)

Other, less obvious modifications were basically those suggested by George Ritter to the Manasco Committee, back in 1943. Gear ratios were changed in order to facilitate low-speed lugging, as well as to increase highway speed.

Combustion chambers were redesigned for greater pulling power, and radiator shrouding was improved in the interest of better cooling. The frame was reinforced for greater rigidity. The clutch was strengthened, and a higher-capacity generator was used.

Several concessions were made to the driver's comfort, something Ritter had evidently overlooked: Springs were softened a bit, more effective shock absorbers were fitted, and new and more comfortable seats were installed. Though the jeep still did not offer a car-like ride, it was certainly better than the MB.

Read on to find out how jeeps were put to use on the nation's farms.