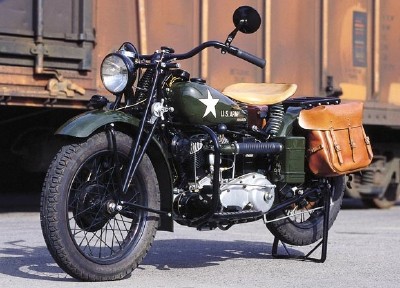 The 1942 Indian 741 was akin to Indian's civilian bikes, with a V-twin engine based on a peacetime design. See more motorcycle pictures.

The 1942 Indian 741 motorcycle and Indian 841 motorcycle were military bikes built for use in World War II. The 741 used Indian's conventional V-twin design, but the 841 had a modified twin and shaft drive intended for desert fighting.

Indian's primary machine, the 741, carried a 30.5-cubic-inch flathead V-twin based on the civilian Thirty-fifty model. Less powerful than Harley's 45-cubic-inch WLA, the 741 was used mainly by couriers and scouts, as what it lacked in performance it made up for in durability.

A hand-shifted three-speed transmission and foot-operated clutch were fitted, both being normal practice for the day.

It must have been confusing for a rider to go from an Indian to a Harley, however, because the Indian's clutch was engaged when the lever was pushed down with the heel, while a Harley's engaged by pushing down with the toe.

Produced alongside the thousands of Indian 741s outfitted for military use was the Indian 841 motorcycle, which was designed specifically for desert missions. With its "sideways" V-twin and shaft drive, it represented a radical departure from the company's typical machines.

The 45-cubic-inch engine of the Indian 841 motorcycle was a flathead V-twin, but it was mounted perpendicular to normal Indian practice, with the cylinders sticking out into the air stream. Despite the unusual arrangement, many internal components were borrowed from the company's Sport Scout model.

Up front on the Indian 841 motorcycle was a girder-style fork, same as the Indian 741, but the rear was fitted with the company's traditional "plunger" suspension, which the 741 lacked. Final drive was by jointed shaft, a configuration deemed more suitable for use in the abrasive desert sand.

Contrary to conventional practice, the Indian 841 motorcycle had a foot-shift/hand-clutch arrangement, as did Harley's desert bike, the XA. Also like the XA, only about a thousand 841s were ever built. Unlike the XA, however, at least some (probably fewer than 50) saw military service.

The balance were sold to civilians, most being converted for use on the street, and many can still be found at motorcycle shows across the country.

See the next page for more picutres of the 1942 Indian 741 motorcycle and Indian 841 motorcycle. 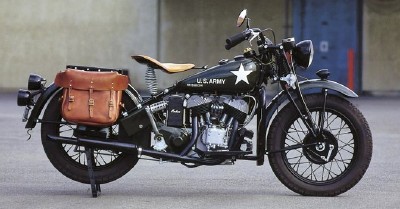 The 741 military motorcycle was based on a civilian Indian and had a 30.5-cubic-inch flathead V-twin engine.

After their use in World War II, often as courier and scout bikes, the 1942 Indian 741 and 841 models were sold as surplus to civilians for street use.

The 741 had a stand-alone speedometer mounted to the fork, while this gauge on the tank kept track of the battery's charge.
Lots of civilians eventually got this view from the Indian 741. Thousands of its engines were sold postwar to bargain hunters and do-it-yourselfers.
The Indian 841 motorcycle included a final drive by jointed shaft, deemed more suitable for desert use.
Unlike the 741, the 841 model was fitted with the company's traditional "plunger" suspension.
Only about 1,000 Indian 841s were built, and fewer than 50 are thought to have actually seen military service.