War Feats of the Jeep 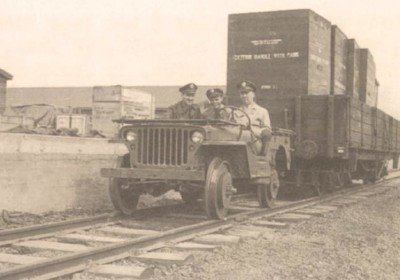 The many war feats of the World War II jeep made history. Fitted with flanged steel wheels, jeeps were used on railroads in virtually every theater of operations. In the Philippines a little quarter-tonner pulled a 52-ton supply train for 19 miles, averaging 22 miles per hour. In France, they ran along the main rail lines, while in Australia they were used as switch engines.

Easily transported by amphibious landing craft and by air, the jeep went everywhere. It was reported that a jeep was the first motor vehicle to conquer the steep climbs and dense jungles of a new India-China route supplanting the Burma Road.

The jeep garnered quite a reputation as the first vehicles to pass the treacherous Burma Road.
©Chrysler LLC

At Rangoon, as the Japanese advanced, hundreds of China-bound jeeps stood on the dock, awaiting delivery to Generalissimo Chiang Kai-shek. To keep those jeeps from falling into enemy hands, authorities turned them over to British troops and to anyone else who would drive them north. The story is told by A. Wade Wells:

"They slogged through glue-like rice paddies on liaison missions; they yanked stalled trucks and guns out of ditches; they carried machine gunners to front-line positions; and, peppered with sniper bullet dents, they came back for more. They carried panic-stricken women and children to points of comparative safety. In short, they made history."

Altogether, the jeep's performance bordered on the incredible, prompting one high Army officer to comment that the quarter-tonner could "do anything except swim or climb a greased pole." War correspondent Ernie Pyle once observed, "It does everything. It goes everywhere. It's as faithful as a dog, as strong as a mule, and as agile as a goat. It constantly carries twice what it was designed for, and still keeps on going. It doesn't even ride so badly after you get used to it."

Stories of the jeep's wartime feats have long since become a part of American folklore. There was, for instance, an incident that took place in 1944 during the Battle of the Bulge. A Belgian sentry at a checkpoint stopped a jeep carrying three men wearing U. S. Army uniforms. Speaking German, he immediately demanded their surrender. Asked afterwards how he knew they were Germans, the Belgian replied, "One, the colonel was riding in back and the aide was driving. The real American colonel drives and the aide rides next to him. Besides, the American colonel never rides in back because it gives him -- how you say? -- the piles!"

Generals never rode in the back of the jeep because the front seat had more room and offered a much better ride.
©Chrysler LLC

One of the more hair-raising jeep stories was reported by Homer Bogart, of the New York Herald Tribune. It took place during General Douglas MacArthur's march on Manila. A patrol consisting of one light tank, six jeeps mounting machine guns, and a half-track was driving south on the Manila Road, headed for Angeles, some 48 miles from Manila.

"I rode in the half-track," Bogart reported, "with the tank and two jeeps out in front and the other jeeps bringing up the rear. A short distance beyond Mavalacat airfield, with its heap of wrecked Japanese planes we passed the front line and sped on across a no-man's land of dried-up rice paddies and occasional clusters of grass huts.

" 'O.K.' shouted Corporal Bob Lucked, of St. Louis. 'From here on it's all Nips! Shoot anything that pops out!'

". . .At the edge of Quail the road curves gently. Around the bend we saw the lead tank come to an abrupt halt. Its crew radioed back a message: 'Roadblock 200 feet ahead.'

"A stout red-faced second lieutenant hopped into the half-track and grabbed the radio mouthpiece. 'That block wasn't there yesterday,' he grumbled. 'Send jeep five ahead to investigate.'

"... Then it happened. We saw the tank lurch in a cloud of black smoke and dust. Its radio went dead.

"... Instantly, from every thicket and shed in front and on either side came the whine of snipers' bullets and the sharp explosions of grenades. A mortar shell burst 100 feet behind the half-track.

"There was a frantic moment of indecision. The red-faced lieutenant wanted to pull out and bring up mortars. Sergeant Ralph Nyquist, the radio operator, who hailed from Marquette, Michigan, was for racing up the road and saving the tank crew.

"And he waved frantically at the three men in the jeep, who had no armor protection, urging them into the enemy fire."

Incredibly, Bogart's story has a happy ending. While the jeeps covered the action with a curtain of machine-gun fire, the half-track moved up to the stricken tank, and the entire crew was saved.

Yet despite its incredible versatility and amazing war feats, the jeep still had its shortcomings. Learn more on the next page.