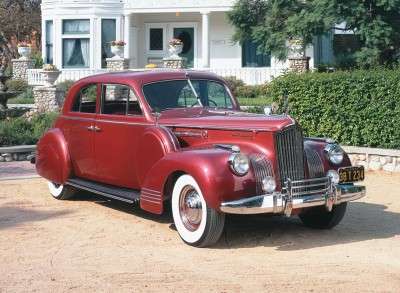 The 1941 Packard One Eighty was available through special pictures of classic cars.

The 1941 Packard One Eighty had simple beginnings. In 1899, James Ward Packard rode in the first horseless carriage of his own design. James and his brother, William Doud Packard, took their background in electrical equipment and machinery, and added Alexander Winton's former principal engineer and shop superintendent, laying the groundwork for an automotive dynasty that lasted until 1958.

When Packard released its Nineteenth Series models One Ten, One Twenty, One Sixty, and One Eighty in 1941, no one had to "Ask the man who owns one" what it meant to drive one. Changes in this series included headlights molded into the fenders, larger radiator side grilles, a longer hood, and fender-mounted parking lamps. The One Eighty was available on special order with bodies custom- built by independent coachbuilders, and LeBaron was one of the best.

Roger and Gerri Gibb, of Irvine, California, bought their 1941 Packard LeBaron Sport Brougham in 1996 from Russ Murphy, who found the car in a carriage house owned by Nelson Rockefeller's sister. Murphy spent two years repairing deterioration from years of neglect, completing the restoration in 1979, which earned 100 points at the Classic Car Club of America's Midwest Grand Classic. For the next 16 years, Murphy and the One Eighty were a familiar sight on the show circuit.

Twenty years of driving enjoyment took its toll on the Carmine Red Metallic Sport Brougham. Roger replaced and repaired a number of mechanical parts, such as the selective synchromesh three-speed transmission with overdrive and the Dual-Stream Heater with auxiliary defroster. He restored the interior to its original opulence with walnut-inlaid doorsills and a burled-wood instrument panel.

The Gibbs own Number 2041, one of 99 special four-door sedan bodies commissioned from LeBaron; an estimated 26 are known to still exist. An original buyer paid $3,545 for its distinctive side mounts, enameled hubcap emblems, and Cormorant radiator mascot. The running boards were a free option that could be ordered in place of the chrome gravel shields delivered with the car.

Like the former owner, Roger and Gerri drive their car and are quick to tell you that it only traveled in a trailer when it changed hands. With its Safety Flex front suspension, the car cruises at 70 mph effortlessly, surpassing the Gibbs' expectations for comfort.